Last updated: October 13th, 2021 at 10:35 UTC+02:00
Many Android smartphones already suffer from bloatware apps, unwanted notifications, and ads inside stock apps (even from Samsung). Some apps even show full-screen ads on the home screen and the lock screen. Now, it has been revealed that some seemingly harmless ads can secretly install apps on your Galaxy smartphone.

A detailed thread on Reddit explains that some ads currently appearing on Android smartphones can install apps without any user intervention. They can even bypass the Play Store and other security measures included in Android. Essentially, these ads look like any other app listing on the Play Store, and even when you try to close the ad, it installs the app in the background anyway. 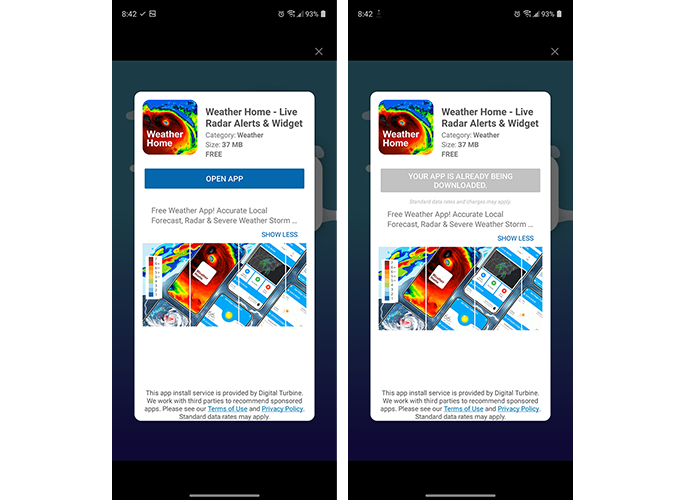 Some digging reveals that this is being accomplished by a system service called Appreciate (by Digital Turbine) that comes pre-installed on smartphones. Some carriers and Android OEMs use this service, and ads or apps promoted by this service are served directly from Digital Turbine’s servers. This behavior can essentially be seen as malware. The company even owns a patent for this functionality.

A few years ago, carriers like T-Mobile and Verizon used to pre-install Digital Turbine’s DT Ignite app on some Android smartphones along with the usual bloatware. But now, the service has gone too far and is installing apps without any user intervention. The company says that the app isn’t supposed to install apps if the user closes or dismisses the promotional pop-up window.

One of the apps called Weather Home installed by Digital Turbine reportedly tries to replace app launchers, runs intrusive ads, and consumes a lot of battery in the background. Digital Turbine says that it double-checks all the apps it promotes before and after the installation. The company will reportedly issue a statement on this controversy, but that doesn’t make any of this right.

Have you seen such ads on your Galaxy smartphone? Let us know in the comments section below.

Google Pixel 6 vs. Samsung Galaxy S21: Which is the best Android phone?