Samsung made some serious money on these products recently

The semiconductor division is a literal cash cow for Samsung. It’s particularly the company’s dominance in the memory market that made it overtake Intel again to become the world’s largest semiconductor vendor by revenue.

The division’s performance did come under pressure a bit when the memory supercycle subsided and prices came down. However, once the pandemic hit, demand for memory products shot up again. Revenues have gradually increased since 2018 and have now reached a new high.

Samsung revenues at a record high since Q3 2018

A report from market research firm TrendForce highlights that the global DRAM sales in Q2 2021 were at $24.1 billion, up 26% compared to the previous quarter. Overall demand for memory products has increased and the average selling price has gone up as well.

Samsung made over $10.5 billion in revenue for its memory chip products in the second quarter of this year. This is the first time since the third quarter of 2018 that quarterly revenues for the memory business have crossed $10 billion.

The company saw a 30% jump in its revenues compared to the same period last year. It still remains the dominant player in the memory chip market. Samsung accounted for 43.6% of the entire market in Q2 2021.

The pandemic has contributed immensely to the increase in demand, particularly due to the sustained need for remote work and distance learning. Demand from the notebook sector was particularly strong. The average selling price of these products also increased. Prices were up by up to 23% in Q2 compared to Q1 2021.

Analysts expect this solid demand to continue in the third quarter of this year but expect that the price increase would be more limited at up to 8%. A decline in demand is predicted for the fourth quarter. 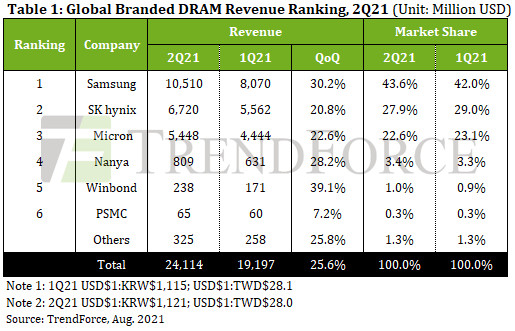