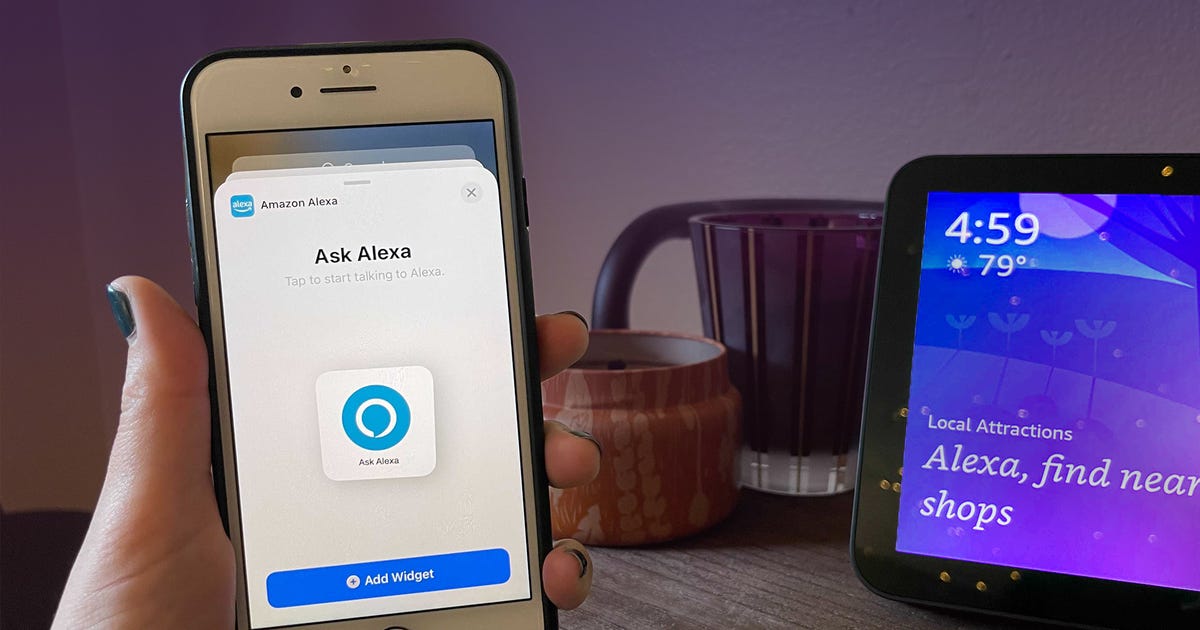 This story is part of Home Tips, CNET’s collection of practical advice for getting the most out of your home, inside and out.

You already know you can give Alexa commands on your Echo devices, but did you know that you can also talk to Alexa on your iPhone? Think of it as taking all of the great features of Alexa, but to go. Whether you’ve just purchased a new iPhone 14 or are still hanging onto another model, it’s a great time to swap Siri for Alexa.

Siri is fine (and Apple added a couple updates for its virtual assistant in iOS 16), but if you would rather converse with Amazon’s trusty voice assistant, you can just add the iOS Alexa app widget to your iPhone or iPad home screen. Once you set it up, one tap brings up the assistant you’d prefer to talk to.

It’s no big secret — nearly every smart home device on the planet works with Alexa — but for Siri and HomeKit, your options are more limited. Not to mention, Siri sometimes gets choked up and stops responding to basic requests (at least, it does on my iPhone). I’ve all but given up on Siri, and you may have as well.

Alexa, on the other hand, is nearly always available, accurate and downright friendly. And Amazon’s voice assistant even has a different name and voice option. If you love having Alexa set timers and reminders, turn on lights and answer questions when you’re at home, wait’ll you start talking to Alexa on your iPhone when you’re out and about.

I’ll explain shortly how to set up the Alexa iOS widget and use it to take Siri’s place on your iPhone or iPad. But first, a word of caution.

There are some functions only Siri can perform: changing your iPhone’s screen brightness, turning on do not disturb, etc. Basically, anything that changes the settings on your iPhone or iPad itself is off-limits for a third-party assistant like Alexa.

However, there’s a lot more that Alexa can do and Siri can’t — especially if you’ve not paid any attention to whether a smart home device you bought is HomeKit compatible. My house is positively littered with smart plugs and video doorbell cameras and all sorts of devices Siri can’t talk to — but Alexa can.

In the end, it doesn’t matter, since you’re not replacing Siri with Alexa. In fact, if you’ve already got the Alexa app (and you probably do), you’re not even adding Alexa to your iPhone — it’s right there in the app. All adding an Alexa widget to your home screen does, really, is put Alexa just one short tap away — but that’s enough to make adding the Alexa widget to your iOS home screen worthwhile.

Read also: The Real Cost of Setting Up an Amazon Alexa Smart Home

Add the Alexa widget to your iPhone home screen

Now that I’ve told you why adding Alexa to your iPhone is beneficial, here are the steps you need to follow to add the Alexa widget to your home screen. It will only take you a few minutes and a few taps since you really only have to create the widget and then move it where you want it on your home screen.

1. On your iPhone or iPad swipe left to right past the first page of your home screen.

2. Press and hold one of the widgets until a menu pops up. Tap Edit Home Screen.

4. Scroll until you see Amazon Alexa or type Alexa in the search box, then tap Amazon Alexa.

5. Tap Add Widget at the bottom of the screen (there’s only one option for size).

That’s the first part. If you’re happy with the location of the Alexa widget, tap Done in the upper right corner and you’re finished. If not, while the widgets are still wiggling, tap and hold the Alexa widget until it “picks up,” then drag it out onto your home screen and drop it where you want it to live, then tap Done.

A word of warning before you begin: While widgets have been neat tools since their debut with iOS 14 in 2020, they can be finicky if you aren’t used to using them. A new widget can make a mess of the arrangement of your home screen if you’re not careful with how you move them around.

And there you have it. Just select the Alexa widget and begin to command away.

By malkitrataulSeptember 23, 2022UncategorizedComment on New iPhone? Ditch Siri and Add Alexa on Your Home Screen Instead