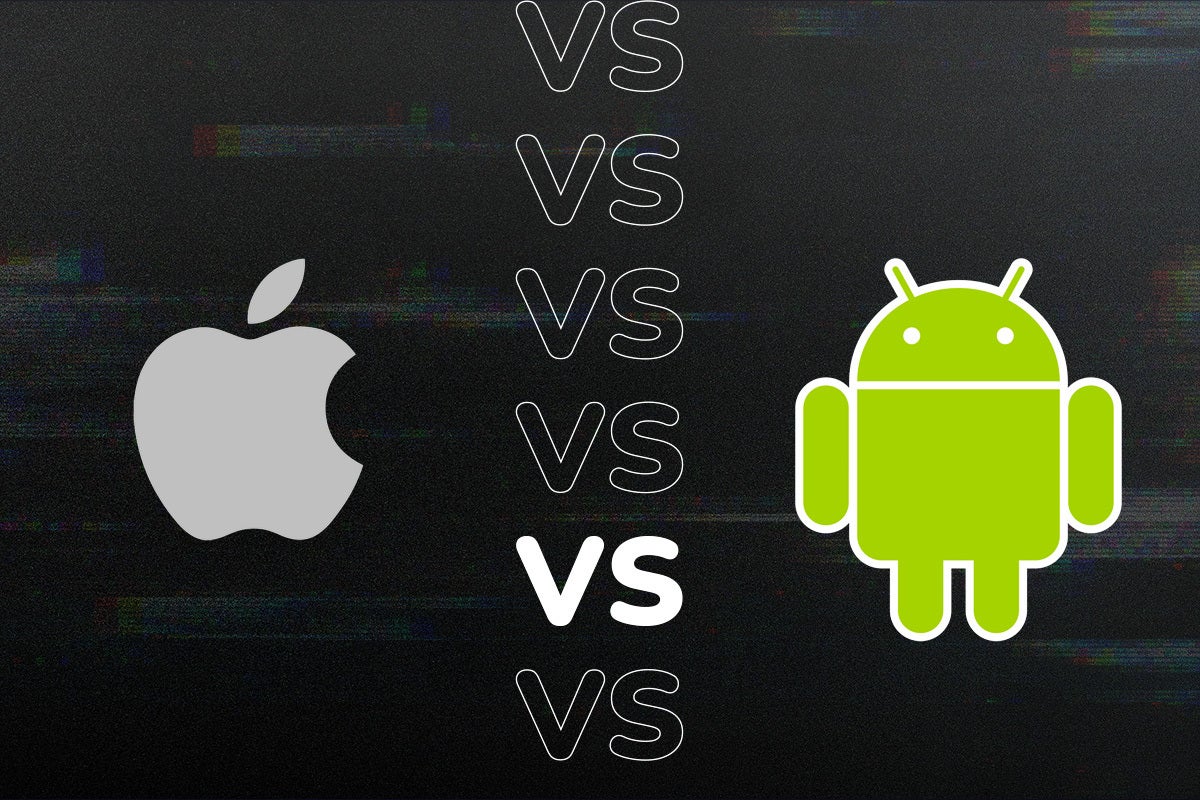 Almost everyone who has bought a smartphone has had to decide what is right for them, an Apple device, or an Android. But what features do both operating systems have and is one subjectively better than the other?

That’s a question that everyone will have to ask themselves when they decide to upgrade their smartphone. And the question gets a little more complicated when you consider that Android covers a wide range of phones, with companies like Google, Samsung, Oppo and Microsoft all using the Android operating system.

However, it’s important to note that Android is owned by Google, and currently the latest Google handsets are the only devices to feature the newest Android OS.

Meanwhile, iOS is exclusive to Apple iPhones, having a different interface and favouring apps like Safari and Mail over Google and Gmail – though the latter two are available.

To help ease the pain of deciding which OS is right for you, we’ve curated this in-depth guide on both platforms and what they offer. Keep reading to find out everything you need to know.

Starting off with Apple, the most recent iteration of iOS is iOS 16, which launched on 12 September 2022. This update will apply to all iPhones released after the iPhone SE 2 and will be available to use on the new iPhone 14 series at launch.

One of the biggest features of iOS 16 is the reimagined lock screen; you can customise font styles, display widgets and showcase some of your favourite photos, with an emphasis on customising your device to suit your needs best.

You can also create multiple lock screens that have different backdrops and aesthetics, meaning that you could create a specific lock screen with certain widgets, such as the weather or the calendar, for certain scenarios.

Apple also has updated Focus, allowing you to customise notifications. Apps and people can be silenced, and Focus filters mean you can set boundaries in Apple and third-party apps, such as Messages or Mail, to silence distracting content.

You are now able to edit messages that have been sent or even unsend them completely, with the option to mark a message as unread if you don’t have the time to respond when you see it. It’s important to note that you will only be able to edit or unsend a message up to 15 minutes after it was originally sent, after that you won’t be able to alter it.

iOS 16 has introduced more features than what we have listed here, and generally, it seems like Apple is focusing more on customisation elements as well as making its AI more intelligent.

In terms of tablets, iPadOS is the software of choice for Apple’s iPad line. It takes the base features available on the phones, and tweaks them more for the larger screen – including features like spilt-screen multitasking.

Android 13 is the most recent version of Google’s operating system, being rolled out in full on 15 August 2022. Right now, any Google handset released after the Pixel 4 can run Android 13, which includes the Pixel 6, Pixel 6 Pro and Pixel 6a.

Other handsets that use Android can access the beta form of the operating system, with Google claiming that a full rollout will come later this year for brands like Oppo, OnePlus, Realme and Motorola. However, as every brand’s version of Android is different it’s hard to really gauge when the update will arrive elsewhere.

Android 13 isn’t a huge rebuild on Android 12 and its features, adding more customisation elements. You can customise non-Google apps to match your phone’s wallpapers and colours, with the aim of making your home screen more personalised and suited to your needs.

Google also added the ability to assign specific languages to individual apps, allowing people who speak multiple languages to keep their device’s system in one language while keeping apps in a different language.

In terms of safety features, Android 13 will clear your clipboard history after a period of time if you have been copying personal information, such as your email, address or login credentials to make your device more secure.

Apps that you download on Android 13 will also need explicit permission to send notifications, rather than being allowed to send them by default, making your home screen less cluttered and less distracting.

Moreover, Android 13 has adopted Bluetooth Low Energy (LE) audio which results in lower latency; this helps to reduce delay and allows you to hear audio that’s better in sync with the source.

Android 13 also can be used on selected tablets. Android tablets will be able to register your palm and stylus as separate touches, allowing you to draw and write on your tablet without creating accidental marks by resting your hand on the screen.

The first version of iOS was introduced in 2007 and was called iPhone OS. Compared to the most recent OS, this was very barebones, giving users access to various apps such as Clock, Calender and Notes, among others. There was no App Store, and no copy and paste functionality.

The first version of the Android OS was called Android 1.0 and was released in beta in November 2007, rolling out fully in September 2008. Google acquired Android in 2005 before the first operating system was released and since then has used the technology on its own line of devices. However, Android is also used by myriad other companies that develop phones, coming in as the main rival to iOS.

Despite being owned by only two companies, iOS and Android make up a massive chunk of the mobile market, with other mobile operating systems falling into obscurity over the years. That being said, there are other operating systems out there to choose from, like Sailfish, Tizen Open-Source and KaiOS, though they are a lot less popular.

Since Android and iOS both run differently there are different levels of security associated with them. Starting with Android, they are unfortunately an inviting target for malware developers since there are more of them in the wild, as we saw in the previous section.

However, that doesn’t mean that iPhones are not susceptible to attacks. Because the software for iPhones is so homogenous, one successful attack could affect the whole system. This would not be the case with Android as it’s very fragmented, and it’s unlikely that one attack would be able to access as much information.

Despite this, it does look like iOS is the more secure system by default since the Apple App Store is much stricter with what it allows on the platform, meaning that you are less likely to download a malicious app than if you were using the Android Google Play Store.

And as we’ve mentioned, Android updates are usually staggered, with Google handsets usually being the first to access the latest software. This could be dangerous when trying to protect users from an attack; while Apple can simply push a software update for all its users, people with an Android device will need to wait for their device manufacturer to test updates before pushing it to users.

If you want to learn more about the security and safety practices of Android and iOS, take a look at our in-depth piece on which platform is more secure, with advice and tips from leading security experts on how to stay safe.

As mentioned in the last section, iOS and Android have separate solutions when it comes to downloading apps. Apple uses the App Store which was developed by Apple and released in 2008 a day before the iPhone 3G launched.

According to Apple, there are almost two million apps available on the App Store with 100% of apps being automatically screened for known malware. Moreover, over 215,000 submissions were rejected by Apple last year for violating privacy guidelines, showing the company’s strict screening process for apps on its Store.

On the other hand, Android favours the Google Play Store, which is operated and developed by Google, and released in 2008. There are over 3.4 million apps available to download from the Play Store, although Google is less transparent than Apple in revealing how often it checks the malware for its apps, and how many get rejected.

And while the App Store is not impenetrable, there have been many instances where people have accidentally downloaded malware-infected apps from Google Play, since the testing process is less rigorous and the company allows more content to be uploaded.

Deciding if iOS or Android has a better camera overall is an impossible question as there are multiple handsets that support Android, meaning that there is no standard.

Arguably, since Apple has full control over the design and specifications of the camera, there is more consistency in the quality of the camera on iOS devices. This can’t be said for Android, as some supported devices will sport a lens made of glass while others will favour plastic, and sensors can greatly vary depending on the smartphone manufacturer.

However, the great variety offered by Android means that consumers can choose a camera that best suits their needs, from the features included to the price.

The iPhone 14 Pro features a new 48MP Main camera with an advanced quad-pixel sensor, delivering four times the resolution in ProRAW. Apple developed larger sensors to let in more light and has developed a new Photonic Engine that allows Deep Fusion to happen earlier in the picture-taking process, which preserves more data to deliver a brighter and more vibrant image.

However, the flagship Pixel 6 Pro offers a 50MP Main camera, with our review noting how realistic photos looked. The Pixel series also comes with a number of camera features like Real Tone, Face Unblur and Magic Eraser, which allows users to create more personalised images that have more character.

Since there is so much difference in the quality of the camera when it comes to Android devices, you can’t say that one is definitely better than the other. But, if you’re interested in seeing which smartphones we’ve reviewed pack the best cameras, check out our best camera phones list, which features entries from both iOS and Android.

Android and iOS come with a range of different features that provide their own benefits and downsides. Ultimately, you may find that it comes down to personal preference, and anyone who wants to own an iPhone specifically will be automatically in the iOS ecosystem by default.

The difference in UI will also have an impact on your experience using either device, and you may find that you prefer the look and feel of one operating system over another.

However, it’s important to take these factors into account when considering a new device. If you’re still interested in learning more about handsets and how Apple and Android devices can differ, check out our best smartphone list for a more comprehensive view. You can also see our best affordable smartphones list, or if you know which operating system is right for you, we have dedicated best lists for the best iPhone and the best Android phones so you can see what options are available right now.

By malkitrataulSeptember 13, 2022UncategorizedComment on Android vs iOS: The big differences explained