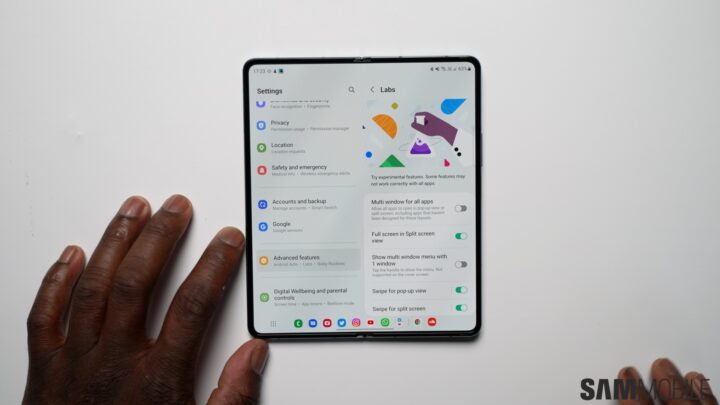 Last updated: September 7th, 2022 at 16:56 UTC+02:00
The Galaxy Z Fold 4 is the first Samsung phone to run Android 12L, and we seem to finally have an explanation as to why this tablet-centric OS version didn’t debut on Galaxy devices before August 2022. Despite their silence on the matter, it turns out that Samsung and Google have worked closely to develop Android 12L together. Even though the two companies haven’t talked much about this publicly in the past, a recent interview with Samsung VP Yoojin Hong reveals that Android 12L exists only because of a close collaboration between the two tech giants.

Yoojin Hong revealed at IFA 2022 that Samsung has to work with Google “every time we have a new form factor.” Thankfully, Google’s engineers were highly enthusiastic when they first saw Samsung’s foldable phone project, so negotiations for a custom OS version proceeded. However, before Google could commit to Android 12L, it had to get something from Samsung in return. The details of the deal are not entirely known, but it turns out that Google wanted Samsung to develop at least one foldable phone per year before it could get on board with Android 12L. (via Android Authority)

Samsung’s Yoojin Hong said: “Are we going to continue to produce this phone every year? It was their question. It was obviously very complicated to answer them, we are talking about technology. We didn’t know what was going to happen the year we ship the device, something crazy could happen, anything was possible. But we are fully committed, we have decided to say that we will go through and overcome these difficulties. So we said we were going to do it. We made a commitment at this meeting. It was a nice feeling, you know, to say, ‘yes, we’ll do it!’”

Android 12L exists thanks to Samsung’s commitment to foldable phones

As we all know by now, Samsung has released not one, but two foldable phones every year for the past couple of years. This gave Google the confidence needed to help Samsung co-develop Android 12L, and development commenced. According to Samsung, it was an exciting time for both development teams.

Regardless, Google wanted some security before investing time and resources into Android 12L. From providing APIs to maintenance, Android 12L was a big undertaking for Google on behalf of Samsung. And since an OS without the hardware to carry it doesn’t have much value in the real world, Google wanted to make sure that Android 12L has a home.

Samsung is now fully committed to the foldable smartphone market, and Android 12L is officially out. The company now aims for half of its flagship phones for 2025 to be have a foldable display. The company may also release a third foldable model eventually, and early rumors suggested it might be an affordable flip phone.

By malkitrataulSeptember 7, 2022UncategorizedComment on Android 12L exists only because of Samsung’s commitment to foldables