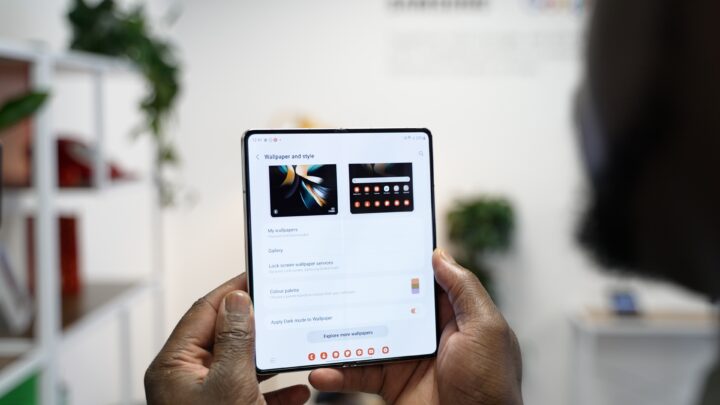 The company has done a good job of convincing customers that these phones are durable enough to be used as daily drivers. Millions of people across the globe are now using their Galaxy Z Fold and Galaxy Z Flip handsets as their primary devices. They’re able to keep up with the rigors of daily use. It doesn’t hurt that the newer iterations of these devices also happen to be water resistant.

Durability continues to be a concern for customers, even more so for the foldable panel, which continues to get more durable but still has a long way to go before it can match the durability of conventional display panels. This is a technical limitation. The panel can’t have a hard cover glass since it won’t be able to fold in half.

Samsung ships its foldable smartphones with a screen protector installed out of the box. The company recommends that customers don’t try to peel off the protector by themselves because if done improperly, it may result in the panel being damaged. It also recommends that customers take their device into an official service center to get the protector replaced. However, as we’ve highlighted before, something as simple as a protector replacement can make Galaxy foldable owners feel like second class citizens.

Last year’s foldable devices, the Galaxy Z Fold 3 and Z Flip 3, had a known issue with the screen protector bubbling up around the hinge. It wasn’t a major cause for concern since there was no damage to the panel itself. The protector just bubbled up and it wasn’t good to look at. Most device owners would prefer getting it replaced to restore the pristine look of their device.

If you take it in for replacement at a Samsung service center, expect to spend between $20 to $30 for this minor part. In select markets, customers can walk-in and get the replacement done in under an hour. In others, they may be required to leave their phone for a few days, and that just makes this entire process even more frustrating.

Samsung has previously offered discounted panel replacements with its foldable smartphones to entice customers who may be on the fence about buying them. They had the peace of mind that if the display were to go bad, they’d be able to get it replaced with an OEM part from Samsung for a fraction of the cost. That was a good incentive by Samsung and it likely helped a lot of customers make up their mind about buying these devices.

For a company of Samsung’s size, this would have been like a drop in the ocean. Not everyone who bought one of these devices would go for a replacement. Those that did would appreciate that Samsung was providing them with exceptional after sales service for an issue that’s known to happen on its foldable phones.

The Galaxy Z Fold 4 and Galaxy Z Flip 4 haven’t been out on the market for long enough so it’s unclear whether we’ll see similar protector degradation as we did on the predecessors. It feels like a missed opportunity for Samsung to generate some goodwill with customers who are spending a lot of money on these devices. Hopefully, the company will offer this with subsequent models.

By malkitrataulSeptember 3, 2022UncategorizedComment on Samsung’s foldable phones should get a free screen protector replacement