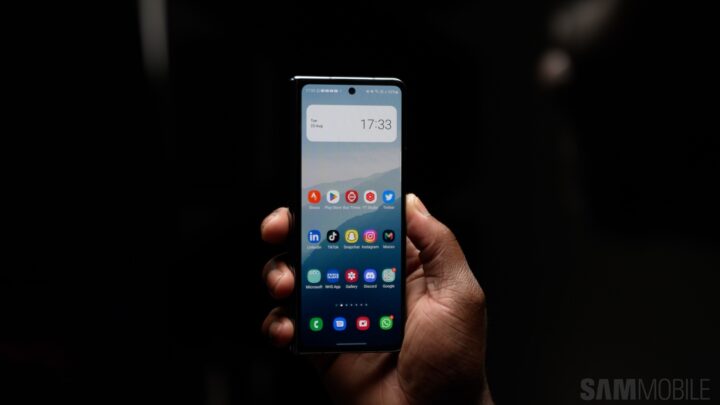 Samsung has become pretty good at coming out with new foldable flagship smartphones every year. The Galaxy Z Fold 4 is the fourth iteration of the first foldable device from Samsung. It takes over from the Z Fold 3 which was the first foldable to feature an under-display camera, IPX8 water resistance, and support for the S Pen.

Even though the Galaxy Z Flip series remains the foldable of choice for the masses, largely because of its more accessible price point, the Galaxy Z Fold has always been better suited to those who need a true productivity behemoth.

Is the Galaxy Z Fold 4 capable of delivering on those expectations? Does it offer enough beyond that to justify its $1,799 price tag? All that and more to be covered in this Galaxy Z Fold 4 review.

Samsung has stuck with its familiar design language for the Galaxy Z Fold 4 so it doesn’t look all that different from the model it replaces. If one doesn’t look hard enough, it might not be easy to differentiate the two at first glance. However, the subtle changes that Samsung has made are quite meaningful.

This was a nip and tuck operation for Samsung.

The height has been reduced by 3mm compared to the Z Fold 3 and the device is 0.3mm slimmer than its predecessor when unfolded. Samsung has also reduced the weight by 8 grams. You won’t notice it in isolation when compared to the previous model since the difference is so nominal, but it’s a welcome change nonetheless.

The flatter edges are a good addition and with the glossy finish they do a good enough job of ensuring that it doesn’t look exactly like its predecessor. The flatter frame provides a good visual contrast to the beautiful matte finish of the rear glass panel that’s protected by Gorilla Glass Victus+. It’s also great to see that the IPX8 water resistance rating is present as well.
The hinge is an integral part of any foldable smartphone and Samsung has utilized a new hinge for the Galaxy Z Fold. It’s 6mm narrower and slimmer. The new mechanism inside also makes it easier to open and close the hinge. This enables the device to fold and unfold more smoothly.

While the 6.2-inch AMOLED 120Hz display is the same size as its predecessor, it has a wider 23.1:9 aspect ratio. This makes an incredible difference in the user experience. The cover display almost feels like a regular 6.3-inch phone. Almost being the key word here, as ideally you’d want a 22:9 ratio on a screen of this size.

Samsung has also trimmed the bezels around this display so not only does the panel look very good, it’s also much easier to use now. You’ll find yourself pressing the wrong keys much less since the display isn’t as narrow as it used to be on earlier models. As far as the panel’s quality is concerned, all you need to know is that it’s a Samsung AMOLED panel, and they are the best in the business.

The foldable display is also the same 7.6-inch size as its predecessor, however, it too benefits from significantly trimmed bezels. This makes the viewing experience so much better. The panel itself is also wider and shorter. It also features an under-display camera which is better hidden this time around due to a new sub-pixel design. It’s almost if the UDC doesn’t exist, which is what you’d want it to feel like.

Samsung has made the panel more durable

The company claims that the UTG panel is 45% stronger than before due to the new materials and manufacturing process. Samsung Display, the company that makes these panels, has also done some interesting and innovative things to increase perceived brightness and color reproduction. The crease is ever-present but it doesn’t really bother the user. If you’ve been a foldable smartphone user for a couple of years, it won’t even register for you anymore.

The under-display camera didn’t get a resolution bump so it’s the same 4-megapixel as the Galaxy Z Fold 3. However, the new sub-pixel design does help it capture clearer pictures, so they feel higher resolution even though the hardware didn’t get upgraded. This is obviously not the best camera on the device as the results will often look washed out and soft, but that’s to be expected.

This includes the 50-megapixel primary sensor a 12-megapixel ultra-wide, and an upgraded 10-megapixel telephoto sensor with 3x optical zoom and OIS. The results from these cameras are excellent for the most part. You’ll never find yourself in a position where the cameras on the Galaxy Z Fold 4 won’t be able to get the job done.

You might find that the primary lens tends to overexpose shots marginally but this is something that can easily be addressed by Samsung through an update. The optical image stabilization and video stabilization are noticeably better so photos and videos of your hyper kids or pets will be crisp and clear for the most part.

When coupled with Samsung’s Space Zoom technology, it does a good job of letting you capture clear shots of objects further away. Expect reasonable quality up to 20x after that the digital zoom kicks into high gear and results in a noticeable degradation of quality.

You’ll find Android 12L and One UI 4.1.1 on the Galaxy Z Fold 4. This is actually the first smartphone to ship with Android 12L, a special iteration of Android that Google has created for devices with large screens. The addition of the taskbar is one of the biggest and most useful changes. It provides an almost desktop-like multitasking experience, in that you get quicker access to recent and most used apps.

Z Fold 4 is the first to ship with Android 12L

You can even drag and drop apps right into split view mode and then save that app pair in the taskbar for quick launching. While it would be nice to have more control over the apps that appear on the taskbar, but this is a good starting point. Flex Mode has also been improved and now works as a trackpad in the bottom half of the display. At this point in time it feels more like a novelty but as more apps get optimized for Flex Mode, we may see more use for it.

Elements of first One UI 5 beta are also here with advanced features in labs giving you the option to swipe up to split screen and pop up view. Other than that, the user interface will be familiar territory for Samsung users. One UI 4.1.1 is optimized very well for the device and works effortlessly.

With the Qualcomm Snapdragon 8+ Gen 1 under the hood, you can rest assured that the Galaxy Z Fold 4 has enough power to handle everything that you throw at it. The chipset is excellent at delivering consistent performance even under heavy workloads. So regardless of how heavy of a multitasker or mobile gamer you are, the Galaxy Z Fold 4 will keep up without breaking a sweat.

The 12GB of memory is plenty and with up to 1TB of storage available, you’ll have plenty of space to keep your data. Do keep in mind that the Galaxy Z Fold 4 doesn’t have a microSD card slot. So if more onboard storage is what you’re after, you’ll need to spend some more money on the higher storage variants.

There was concern among fans when it was revealed that the Galaxy Z Fold 4 will have the same 4,400mAh battery as its predecessor. However, power efficiency has been improved across many areas, and that has a positive impact on the battery longevity. While it would have been much better to get a larger battery, the one it currently has is more than enough to get you through the day.

If you had any concern the Fold 4 is still using the same 4,400mAh battery size then I will say now that this should be no concern. A larger battery size would have been nice no doubt, especially getting close to the magic 5000mAh battery size, but the collective improvements to the display and especially the efficiency of the 8+ Gen 1, see’s the Fold 4 bring some of the best battery life experience on any Samsung devices I’ve used so far, even ahead of my Exynos 2200-powered S22 Ultra.

The new chipset is very power efficient and you’ll notice that very clearly when upgrading from the Galaxy Fold 3. Samsung Display has also improved the efficiency of the foldable panel, which also helps extend the battery life. Despite pushing the device hard throughout the day, it easily lasted the entire day and only required a charge the following day. That wasn’t quite possible with the previous model.

The stand by time is excellent and on my most intense day of using the camera for 2+ hours, after an end to end 12 hour day, the Fold 4 still had a good amount of battery left. I am so glad to say that for a lot of people using the Fold 4, you don’t have to worry about battery life.

The Galaxy Z Fold 4’s power and versatility speak for itself. There’s hardly any device on the market that wears as many hats as this device does. It’s a bonafide flagship smartphone with the latest in mobile technology under the hood. It’s a foldable and provides many benefits as a result of its unique form factor. It supports the S Pen is the perfect companion for those who need to remain highly productive on the go.

So the $1,799 question ultimately becomes, should you buy it? You absolutely should if you’re the kind of person you can extract the device’s full potential. Either you’re a power user who can truly benefit from all of the advantages that this device has or you’re a true gadget lover who just wants one of the best Android phones on the market right now.

For everyone else, this might be overall. There’s nothing sadder than owning something that you you’re unable to enjoy the full potential of. It’s like buying a Ferrari when all you do is drive around the city center under a strict speed limit. If I had a Ferrari, I’d rather take it on a track and enjoy it.

If that’s you then by all means the Galaxy Z Fold 4 should be your next smartphone. If that’s not you, go for the Galaxy Z Flip 4. Samsung’s clamshell foldable is best for those who just want to join the foldable revolution.