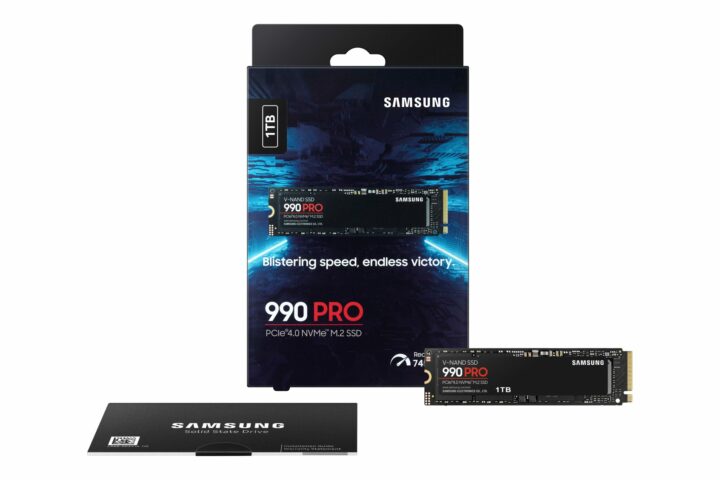 Last updated: August 24th, 2022 at 18:44 UTC+02:00
After teasing “The Ultimate SSD” last week, today, Samsung announced its latest high-performance NVMe storage solution based on PCIe 4.0. As expected, it’s called the 990 Pro, and according to the company, it was optimized for graphically demanding games, intensive 3D / 4K rendering, and data analysis.

Thanks to a new proprietary controller and Samsung’s latest V-NAND, the 990 Pro can achieve sequential read and write speeds of up to 7,450MB/s and 6,900MB/s, respectively, and posts a 55% improvement in random read/write performance compared to the 980 Pro SSD. Furthermore, the new controller, built on a low-power architecture, improves energy efficiency by up to 50% compared to the 980 Pro.

In practical terms, Samsung claims it had performed tests on the 990 Pro using the upcoming Forspoken role-playing game by Square Enix to benchmark the latest game-loading technology. According to the company, the 990 Pro SSD achieved a map loading time of roughly one second. Comparatively, SATA SSDs take four seconds to load the same data, and classical HDDs have to work for about 28 seconds to achieve similar results.

Advanced cooling, with and without a heatsink. Releasing this October

The new controller employed by the 990 Pro SSD has a nickel coating, and the drive has a heat spreader label, both of which work together with Samsung’s Dynamic Thermal Guard technology to manage thermals reliably.

And much like the 980 Pro, Samsung’s new 990 Pro will also be available with a heatsink to maximize cooling when the SSD is used in tight spaces, such as video game consoles — specifically the PlayStation 5 — or compact PCs. The heatsink also has RGB lighting.

By malkitrataulAugust 24, 2022UncategorizedComment on Samsung’s “ultimate” 990 Pro SSD is official, coming this October