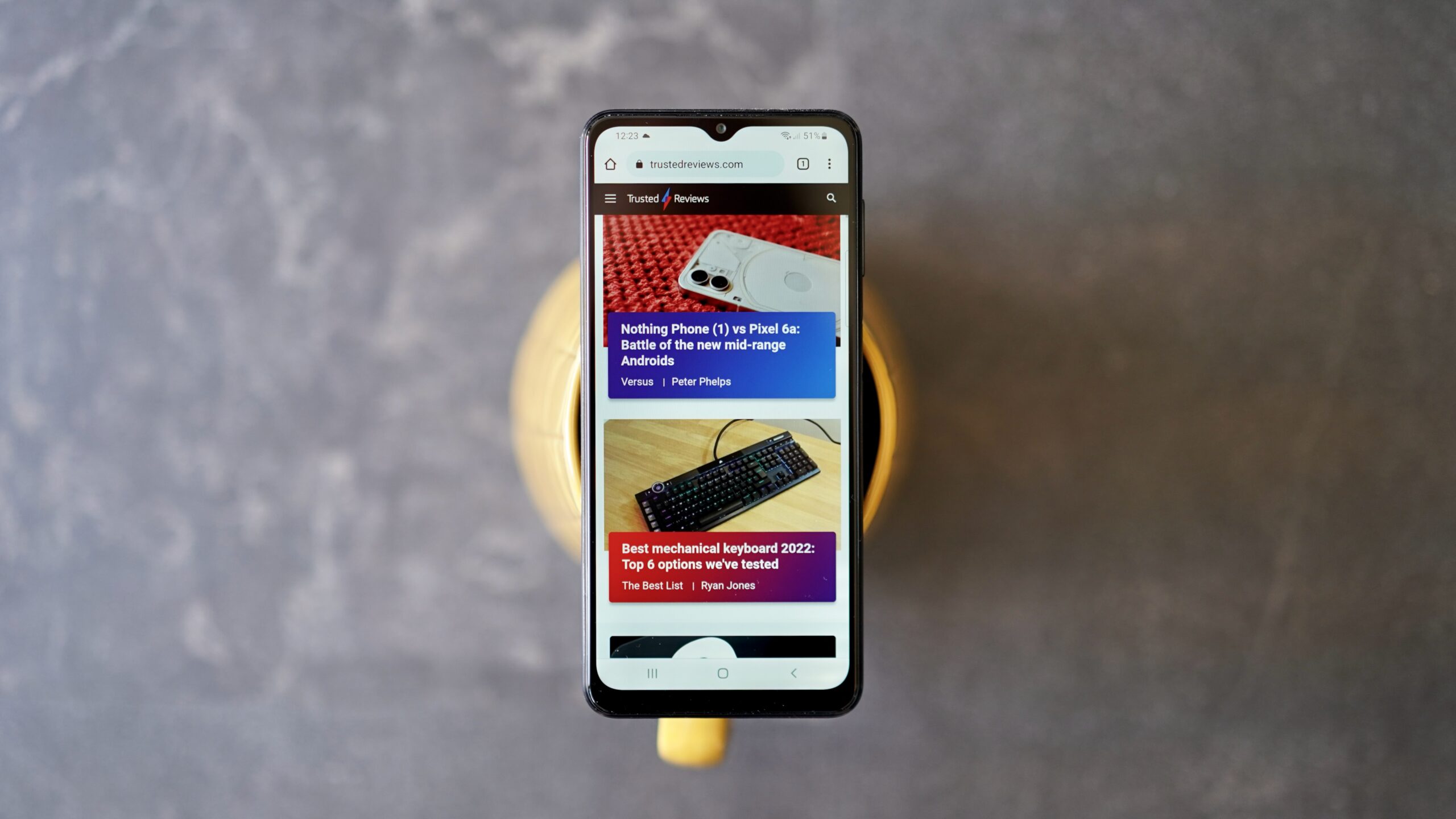 The Samsung A32 5G offers a competent all-round experience, but a poor screen and middling performance drop it behind the leading affordable pack

The £200-to-£300 smartphone market, which you might describe as the ‘premium-affordable’ market if that weren’t such a contradiction in terms, is hugely competitive these days. As the cost of living crisis continues to bite, spending upwards of £500 on a smartphone doesn’t seem like such a smart move for many.

The Samsung Galaxy A32 5G aims to offer a relatively friction-free smartphone experience for an RRP of £249. It largely manages to do so, with a couple of notable hitches in the formula.

It’s got an all-plastic body and a shiny glass-effect plastic back that proves to be a total fingerprint magnet, especially in the Awesome Black shade of my test unit. Consider going with a lighter shade like Awesome Violet or Awesome White if you want to avoid having to look at your own grease all the time.

It’s a solid, unshowy design that speaks to Samsung’s mastery of making phones. Everything is in its right place, with a welcome sense of understatement that many of Samsung’s shoutier budget rivals could learn from. There are no cringey mottos or eccentric go-faster stripes to be found here.

The A32 5G’s dimensions are decidedly less subtle, with a chunky thickness of 9.1mm and a flagship-bothering weight of 205g. This all-plastic phone is surprisingly heavy.

The Galaxy A32 5G’s 6.5-inch screen is comfortably the weakest part of the package. It simply fails to inspire in any way, from its IPS LCD panel (so, no vibrant colours) to its sub-optimal 720 x 1600 (HD+) resolution. Even the refresh rate is below par, with a mere 60Hz at your disposal.

Yes, this can most certainly be categorised as an affordable phone. But it’s quite possible to get an FHD+ resolution, AMOLED panel technology, and 120Hz refresh rates for this sort of money. You can even get all three together in the case of the Poco X4 Pro 5G.

Such rivals will also give you proper stereo sound, whereas the Samsung Galaxy A32 5G only lays on a weedy mono speaker.

The quality of this IPS LCD panel is perfectly fine for what it is, with adequate brightness and not-terrible colour accuracy. But you simply get a much better audiovisual experience from almost all of its rivals. We’ve come to expect better.

Samsung has given its affordable phone four camera sensors, but only two are of any consequence. There’s a main 48MP wide sensor, and an 8MP ultra-wide. The other two slots are occupied by a 5MP macro and a 2MP depth sensor.

It’s all about those first two though, and for a phone of this price, they do a good job. Shots taken with that 48MP main sensor in good lighting pop with color and detail, with decent exposure. Skin tones are captured fairly faithfully too.

The ultra-wide is less capable in all of those areas, but what’s noticeable compared to many of the phone’s rivals is that the tone isn’t a million miles away from the main sensor. Samsung has gotten good at this whole consistency malarkey.

Perhaps unsurprisingly, both cameras struggle in lesser lighting conditions. There’s a serviceable Night Mode, which does well to maintain the general tone of the scene, but detail suffers, and there’s bags of noise in the darker areas.

You’ll also find a 13MP selfie camera, which can capture reasonable snaps in even lighting. It struggles with highlights, however, and there’s a general softness to shots. Skin tones can be a little washed out too.

The Samsung Galaxy A32 5G runs on a MediaTek Dimensity 720 chip with a mere 4GB of RAM. It’s not the most auspicious of set-ups, even at this price.

An average Geekbench 5 single-core score of 415 and a multi-core score of 1625 seem to drive that point home, landing the phone behind the likes of the OnePlus Nord CE 2 Lite 5G and the Realme 9 5G, both of which use Qualcomm’s more mainstream Snapdragon 695 chip.

That’s not to say that the Galaxy A32 5G feels especially slow; flicking between home screens and menus is reasonably fluid – or at least, as fluid as the phone’s 60Hz display will permit. It’s that limited display that likely helps the phone to feel reasonably fast (or at least not slow), as it doesn’t have to push around as many pixels as its similarly priced rivals.

Also disappointing is the Galaxy A32 5G’s 64GB of storage. At this end of the market, we’ve grown well accustomed to seeing 128GB established as the new minimum standard.

We’ve mentioned how the Samsung Galaxy A32 5G’s limited display is a double-edged sword when it comes to performance, but that also applies to its stamina.

The fact that it doesn’t have to push around so many pixels, stacked alongside a hefty 5000mAh capacity, means that it lasts an age. We’re talking genuine two-day potential for light to moderate usage, which is really all the phone’s humble hardware is suited to anyway.

Intensive usage will sap that battery a little further, but not to a ruinous degree. Running the intensive 3DMark Wild Life Stress Test benchmark for an hour solid sapped 11% of a charge, which is respectable.

Charging the Galaxy A32 5G back up to full will take a fair old while, though. Samsung bundles in a 15W charger, which is more than it does with its flagships, but it still falls way short of its affordable rivals.

It takes around an hour to hit the 50% mark from empty, while a full 100% takes a little over 2 hours 15 minutes. The OnePlus Nord CE 2 Lite 5G hits full an hour quicker thanks to its 33W charger.

Should you buy it?

As the long-standing market leader, Samsung knows a thing or two about putting together a balanced phone. While nothing about the Galaxy A32 5G really stands out, it’s a breeze to use day to day.

Special mention should be made for its highly competent camera, which can turn out rich results in good lighting. Its battery life, too, is stellar.

However, Samsung’s choice to use such a weak display is borderline unforgivable, especially when you can get higher resolutions, better refresh rates, and richer colours for the same price elsewhere. Performance, meanwhile, is nothing to write home about.

Given its age, you might now be able to find the Galaxy A32 5G for significantly cheaper than its RRP. At full price, however, there are so many better options.

We test every mobile phone we review thoroughly. We use industry standard tests to compare features properly and we use the phone as our main device over the review period. We’ll always tell you what we find and we never, ever, accept money to review a product.

Tested with synthetic benchmarks and real world use

Does this phone offer 5G connectivity?

Yes, you can get 5G connectivity on this phone provided that you have a compatible SIM card and network coverage.

Does it have an IP rating?

There’s no official IP rating here, so we’re not sure how it would cope when exposed to water or dust.

Types of displays that use self-lighting pixels to provide greater contrast and more vibrant colours than a typical LCD display, as well as sharper blacks.

Offering faster download and upload speeds when compared to 4G. Great for game streaming and HDR video playback. Not supported everywhere yet and speeds vary wildly.

The modern USB connector you’ll find on most Android phones, new laptops, cameras and games consoles. It’s reversible and used for charging along with data-transfer.