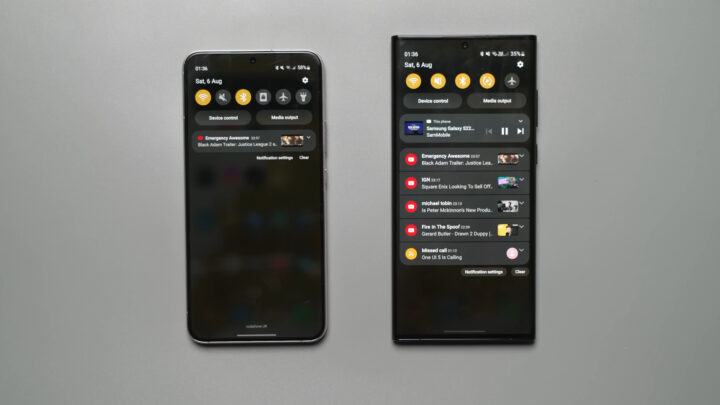 Last updated: August 9th, 2022 at 07:28 UTC+02:00
Samsung recently released the first beta version of Android 13-based One UI 5.0 software for the Galaxy S22 series. The update does not bring a major UI overhaul, but it does bring one change that might Samsung users might not like. First spotted by 9To5Google, Samsung has removed one of the quick settings toggle slots from the notification tray.

Samsung could step back on this decision to remove one quick settings toggle before the final One UI 5.0 update release

With Android 13-based One UI 5.0, Samsung has toned down the number of shortcuts from six to five. Interestingly, the 4×3 grid has been left untouched, and now the icons are placed wide apart from each other. Being a Samsung user, the five icon layout in the notifications tray looks visually incorrect, and the spaces between them would remind you of something missing.

Moreover, the whole point of the quick settings is to allow users to access certain features quickly. Removing one icon from the tray defeats the whole purpose. If Samsung continues with this layout, users would require to perform a second swipe to access the full list of their usual toggles.

Samsung could easily walk back on this decision before the rollout of the final and stable version of the One UI 5.0 update.

By malkitrataulAugust 9, 2022UncategorizedComment on One UI 5.0 shows only five quick settings toggles, one less than earlier