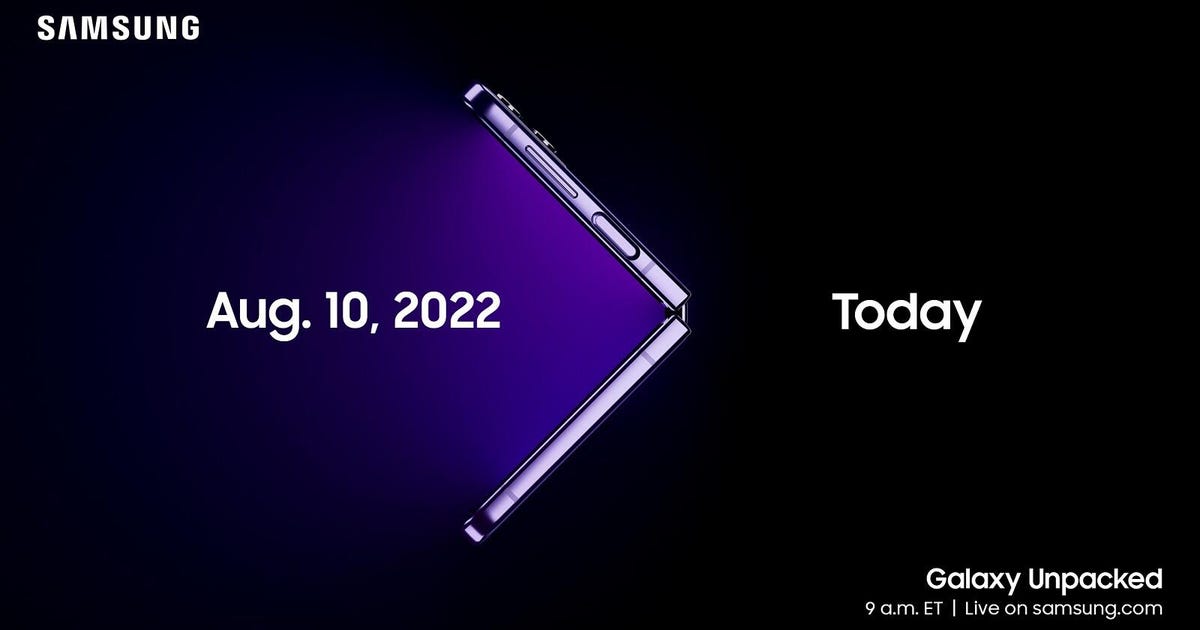 Samsung’s next Unpacked event is happening on Aug. 10, and we expect several new versions of the company’s flagship foldables and smartwatches to be revealed — but there’s always a chance for surprise launches of new devices.

Everything We Expect Samsung to Announce

Don’t expect too many big advances with Samsung’s next foldables. Rumors suggest the tablet-size Samsung Galaxy Fold 4 may have a new hinge and slimmer build, but the leaker jury is out on whether it will include an S Pen slot like the Samsung Galaxy S22 Ultra. Other rumors predict that the foldable will pack the faster Snapdragon 8 Gen 1 Plus chipset, as well as a larger outer display that requires its own under-display camera to complement the one on the inner screen.

The makeup compact-looking Samsung Galaxy Z Flip 4 could get a larger cover display, according to other rumors, which could make it far more useful for reading notifications and previewing selfie photos.

Even if the new foldables have only incremental spec upgrades, the biggest improvement could be price. The Galaxy Fold 3 was cheaper than its predecessor at $1,800 (£1,599, AU$2,499) to start, which is still around twice as expensive as most premium smartphones. The Galaxy Z Flip 3 shockingly came in at $1,000 (£949, AU$1,499), or around the price of an iPhone 13 Pro, making it the most affordable foldable yet and a viable alternative to standard flat smartphones.

But the upcoming Z Fold 4 and Z Flip 4 could be even cheaper, predicts analyst Ross Young, CEO of Display Supply Chain Consultants, who tweeted that Samsung ramped up production to churn out twice as many of the new foldables as last year’s models, suggesting a possible price cut.

In any case, we expect the new foldables to sell well, since the Z Fold 3 and Z Flip 3 sold more units in their launch month than were sold in all of 2020. With 88% of the more than 7 million foldables sold in 2021, Samsung is in a strong position to continue dominating the niche foldable market, which is expected to grow to over 27 million sold in 2025.

Samsung could launch other products to accompany the foldables, and the most likely is the Samsung Galaxy Watch 5. Rumors predict the next version of the premium smartwatch line could get a body temperature sensor and better battery life, as well as an updated design. Hopefully, it will also fix a glaring flaw in the Galaxy Watch 4 — no support for iPhones — as well as better integration of Wear OS 3, as we felt last year’s watch pulled between Google and Samsung’s ecosystems.

There are other things Samsung could show off, like successors to the Galaxy Buds 2 earbud, tablets or laptops, but we haven’t heard many rumors suggesting any of those are likely to arrive. Still, we could easily be surprised with all eyes on the awaited foldables.

To encourage customers to reserve their phones early, from July 19 until August 10, Samsung is offering an extensive list of discounts based on different bundles, from a maximum of $200 off for those reserving a Galaxy phone, watch, and buds down to a minimum of $30 off for just reserving Galaxy buds. While this could be a hint at what’s coming at Unpacked, the savings could apply to older Galaxy Watch or Galaxy Buds models.

The event is scheduled to begin at 9 a.m. ET / 6 a.m. PT. CNET will be watching and covering the reveals.

By malkitrataulAugust 8, 2022UncategorizedComment on Samsung Unpacked Date Is Aug. 10: Here’s What To Expect