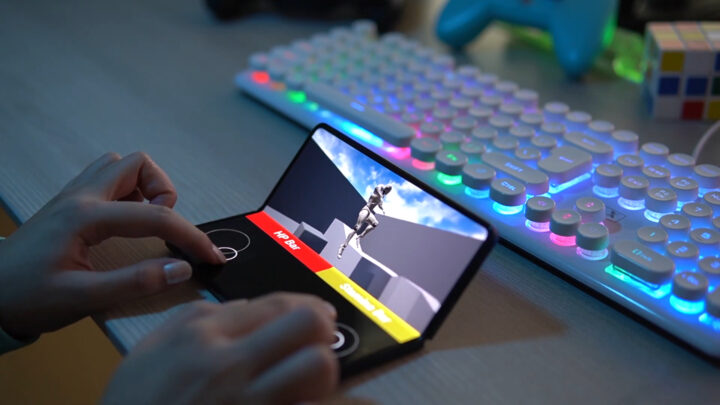 Apart from offering a large display in a portable form factor, foldable phones offer a variety of advantages over candybar-style smartphones. Samsung has already implemented Flex Mode in various stock and Google apps, including Camera, Gallery, Google Duo, Samsung Internet and YouTube. However, the company doesn’t want to stop there.

New videos from Samsung show that the South Korean firm wants game developers to implement Flex Mode in their gaming titles. It has even published a couple of videos to showcase how Flex Mode can be helpful while playing games.

One of those videos showcases a game that displays the gameplay on one part of the screen and the controls on the other screen, freeing up screen real estate for more immersive visuals. The other video shows a game displaying two different camera angles on two parts of the foldable display.

Every year, Samsung reveals how it has worked with app and game developers to implement some Galaxy-exclusive features. And it would be great if the company reveals a couple of games with Flex Mode during the unveiling of the Galaxy Z Flip 4 and the Galaxy Z Fold 4 at the Galaxy Unpacked 2022 event on August 10.

How cool would it be to see the map, weapons, and controls in Call Of Duty or PUBG on one part of the Galaxy Z Fold’s screen and the actual gameplay on the other? Let us know some crazy Flex Mode gaming ideas in the comments section below.

By malkitrataulAugust 4, 2022UncategorizedComment on Could Samsung use this epic flex mode on foldable phones for better gaming?