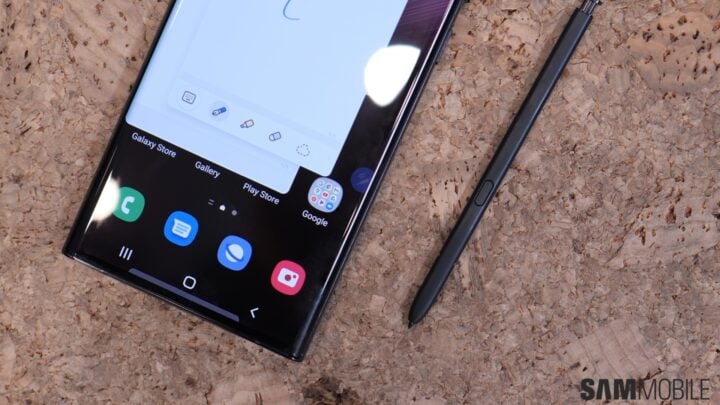 Given the sheer number of devices that it releases every year, finding the best Samsung phones can often prove to be a challenge for most customers. It doesn’t matter if you want a flagship or a budget device. Samsung offers plenty of options for all price ranges.

To make it easier for you to find the one that best suits your needs, our expert reviewers have created this list of the best Samsung smartphones. We’ll explain precisely why a device has made it onto our list and provide you with links to their detailed reviews. This will help you cut through the noise and make an informed decision.

Our list for August 2022 has a great mix of devices, helped by the launch of Samsung’s new Galaxy S22 flagship series. We have also included some of the good Samsung phones in the mid-range and affordable categories that are currently available.

Samsung fans have big expectations from the Galaxy S22 Ultra. It’s not just another one of Samsung’s flagship phones. It’s the reincarnation of the fan-favorite Galaxy Note series. The Galaxy S22 Ultra has been redesigned to look more like a conventional Note. This is also the first flagship in the Galaxy S22 series to have an internal silo for the S Pen.

The cosmetic changes aside, the Galaxy S22 Ultra is still an absolute spec monster. It features a 6.8-inch QHD+ Dynamic AMOLED display with a 120Hz refresh rate that can intelligently adapt from 1-120Hz. It ships with the Exynos 2200 or Snapdragon 8 Gen 1 chipset, depending on the market. The handset can be purchased with 8/12 GB of RAM and up to 1TB of internal storage but it doesn’t have a microSD slot.

Much like its predecessor, the Galaxy S22 Ultra has a 5,000mAh battery that charges at up to 45W. The camera setup has been updated with a 12MP ultrawide, 108MP wide and two 10MP telephoto cameras with 3x and 10x optical zoom respectively. This setup achieves 100x Space Zoom as well. A 40MP front camera is present for selfie duties. Samsung has improved the camera tech and software for enhanced low-light photography.

The Galaxy S22 Ultra ships with an S Pen that’s stored within the device. That’s a welcome change as its predecessor, the Galaxy S21 Ultra, supported the S Pen but didn’t ship with one and required it to be stored externally.

It goes without saying that the Galaxy S22 Ultra will be the best Galaxy phone to be released this year. No other Samsung smartphone will have the kind of bonkers specs it does and that justifies its high price. Couple that with the exceptional build quality and you’ve got a winner on your hands.

There’s no question about it, the Galaxy Note 20 Ultra tops our list as the best Samsung phone for productivity. Samsung has made a number of meaningful improvements to its latest flagship smartphone, particularly the S Pen upgrades. The S Pen latency has been dropped to 9ms in order to provide a more fluid and natural experience with the stylus.

The 6.9-inch Galaxy Note 20 Ultra also comes with the latest in smartphone technology as well as 5G support. It happens to be the first Samsung smartphone to feature a dynamic 120Hz refresh rate display.

This is actually the first time that a Samsung phone has had a variable refresh rate. The Galaxy Note 20’s display switches between 10Hz, 30Hz, 60Hz and 120Hz. It depends on whatever’s being shown on the screen. This is done to save power by not using the maximum refresh rate in circumstances where it’s not necessary. Pretty neat.

Samsung has also significantly improved the camera setup compared to its predecessor. There are several new software features and new camera modes that enable customers to get the most out of this $1,299 flagship. All of this makes the Galaxy Note 20 Ultra stand out as one of the top Samsung phones of 2022. Since it can be picked up for cheaper than the Galaxy S22 Ultra, it remains a great S Pen alternative for those who’d rather not spend top dollar on the company’s latest flagship.

Samsung made us all wait quite a bit for the Galaxy S21 FE and finally unveiled it in early 2022. It takes the baton from the Galaxy S20 FE which was a very successful device. It retains the compact DNA with a 6.4-inch FHD+ Dynamic AMOLED display with a 120Hz refresh rate.

The Galaxy S21 FE provides flagship-level performance with its 5G-enabled Snapdragon 888 and Exynos 2100 chipsets, availability varies by market. There’s 6/8GB RAM with 128/256GB of storage. A 4,500mAh battery is present with support for 25W wired fast charging. Samsung has equipped the device with a 12MP ultra-wide, 12MP wide and 8MP telephoto rear cameras with 30x Space Zoom. There’s a 32MP selfie camera on the device as well.

Even though it’s part of the Galaxy S21 series, the Fan Edition model has a distinct advantage. Samsung has confirmed that the entire Galaxy S21 lineup will get four years of Android OS upgrades. Unlike the other handsets, the Galaxy S21 FE shipped with Android 12 out of the box.

Who should buy: Samsung fans on a budget, those who prefer not changing phones frequently.

The Galaxy Z Fold 3 is among the latest and greatest foldable phones from Samsung. While it appears to be similar to its predecessor, the Galaxy Z Fold 2, there’s a lot offered by its unique form factor to be excited about.

Both the 6.2-inch cover and 7.6-inch Infinity Flex display have a 120Hz refresh rate. They’re also 29% brighter than the previous model. The foldable display is now 80% stronger than before. This is Samsung’s first foldable smartphone to support the S Pen on its internal display.

The hinge has added durability and Flex Mode which allows the hinge to free stand at different angles so that the phone can effectively become its own tripod. You can even wirelessly charge it like that!

Samsung has used its toughest aluminium yet for the device’s body. This is also the world’s first foldable smartphone that’s water-resistant. The Galaxy Z Fold 3 has an IPX8 rating for water resistance.

The Snapdragon 888 powers this flagship Samsung phone with 12GB of RAM as standard. It’s available with 256GB and 512GB of non-expandable storage options. This is Samsung’s most feature-packed and powerful foldable smartphone yet. Granted, the cameras could have been better, but the Galaxy Z Fold 3 more than makes up for that in other departments.

It goes without saying that the Galaxy Z Fold 3 deserves a place on this list. It’s truly shaping up to be one of the best Samsung phones ever made.

The Galaxy A53 5G is the perfection of the winning formula that Samsung achieved with the Galaxy A52. It has made meaningful improvements to the device to elevate its status as the mid-ranger to beat. Without a doubt, this is one of the best Samsung mid-range smartphones in 2022. Samsung has made minimal changes to the design while giving it powerful new internals.

The device’s 6.5-inch FHD+ Super AMOLED display has a 120Hz refresh rate. Samsung’s powerful new 5nm Exynos 1280 chipset is coupled with up to 8GB of RAM and 256GB of storage. The camera setup on the Galaxy A53 includes an optically stabilized 64MP main sensor with a 12MP ultrawide, 5MP depth and 5MP macro camera.

Samsung has equipped the Galaxy A33 with a bigger 5,000mAh battery that supports 25W fast charging. However, there’s no charger in the box. The 3.5mm headphone jack has been removed as well. The company will provide four years of Android OS upgrades for the device.

Who should buy: Millennials, mobile gamers and customers who want an affordable yet powerful device.

The Galaxy A33 5G is truly a solid budget smartphone from Samsung. It comes with a 6.4-inch FHD+ Super AMOLED display with a 90Hz refresh rate. Samsung has made it a lot more powerful than its predecessor as it comes with the same Exynos 1280 chipset as the Galaxy A53 5G. There’s also up to 8GB of RAM and 256GB of storage.

The camera setup at the back includes a 48MP optically stabilized primary sensor with an 8MP ultrawide, 2MP depth and 5MP macro sensor. This, coupled with the powerful internals, makes this a great budget Samsung phone.

A 5,000mAh battery keeps the lights on with support for 25W fast charging. Samsung has also committed to providing four years of Android OS upgrades for the Galaxy A33.

Who should buy: Budget smartphone buyers and those who like simple phones.

Why These Are The Best Samsung Phones This Month

Samsung’s strategy has long been to offer something for everyone. We now have one of Samsung’s most diverse smartphone lineups. The Galaxy S22 Ultra is a true spec king with few competitors that can match its raw power. The Galaxy Note 20 Ultra is certainly one of the best Note devices yet from Samsung as it builds on the feedback from Note loyalists and provides them with improvements they have long been asking for.

For customers who want the absolute bang for their buck, there’s the Galaxy S21 FE. It’s one of the first devices Samsung released in 2022. The handset has a great design, flagship-level specs and the promise of four OS upgrades all for a very competitive price.

The Galaxy A53 5G has arrived in March 2022 to take the baton from Samsung’s popular Galaxy A52. The new handset will without a doubt become one of the best mid-range smartphones on the market. The Galaxy A53 5G features a powerful new chipset, faster charging speeds and a great design. Lastly, the Galaxy A33 also gets a major upgrade and it even brings water resistance to more affordable devices, making it worthy of a place on our list.

By malkitrataulAugust 1, 2022UncategorizedComment on Best Samsung Phones in August 2022 – Picked by experts