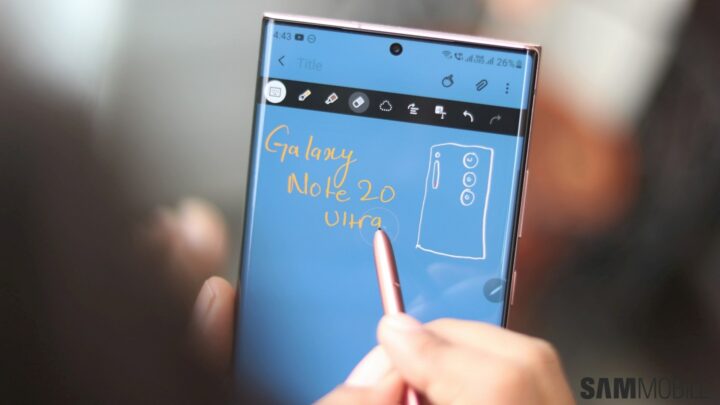 It’s no secret that the Galaxy Note series has long been a cash cow for the company. The lineup has built up a loyal fan base across the globe. Other Samsung flagships may have had their fans, but none commanded the kind of loyalty that this series did.

There was a very good reason for it. The Galaxy Note ushered in the large display size trend for the entire industry. Samsung also swam against the current when it kept pushing a stylus with this device. Even though in the early 2010s, no manufacturer felt that the stylus had a place in the modern smartphone landscape, Samsung proved that it could not only be done but also be done right.

Samsung always positioned the Galaxy Note as the series of choice for professionals. These were flagship devices with high-end specs, a signature design, and an S Pen stylus that enabled users to get work done on the move. This was the DNA of every Galaxy Note device, regardless of whatever cosmetic and incremental changes were made.

The chip shortage caused during the pandemic continued to grip the market in 2021. This was said to be one of the reasons why the decision was made to discontinue the Galaxy Note lineup. Samsung had instead decided to use those chips for its new foldable smartphones. In August 2021, when we’d normally see new Galaxy Note devices, Samsung came out with the Galaxy Z Fold 3 and Z Flip 3 instead.

Samsung said that the Galaxy Note was an idea and that it would continue to live on in the Galaxy S series. It wants fans to know that it didn’t matter if there wasn’t a separate Galaxy Note flagship. They could get a nearly authentic experience with the Galaxy S22 Ultra. Subsequent models will likely continue with this strategy.

However, it felt that this was more of a plan to stop the declining fortunes of the Galaxy S series than to usher in the next chapter for the Note series. It was also quite obvious that this decision had been made to ensure that the spotlight wasn’t stolen from the foldable smartphones. Samsung would be in a tight spot if it launched new foldables and new Galaxy Note handsets in the second half of this year at the same time.

One has to wonder, though, did Samsung rush into this decision? Should it have given it a few more years before ditching the Galaxy Note series? The numbers do back it up. Samsung recently revealed that it shipped close to 10 million foldable smartphones last year. The Galaxy Note series consistently sold more units than that every year.

Moreover according to estimates, nearly 70% of those foldable shipments were accounted for by the Galaxy Z Flip 3. If the idea was that the customers who bought the Galaxy Note handsets would shift to the Galaxy Z Fold series then it’s clearly not working. The majority of Samsung’s foldable buyers prefer the clamshell foldable. Most of its Galaxy Note loyalists are either not switching or still holding on to their devices. Some have decided to take the plunge and opt for the Galaxy S22 Ultra instead.

Perhaps Samsung could have found a way to keep the Galaxy Note series alive for a few more years. Instead of launching two separate models, it could have offered just one. Thus the company’s lineup would be diversified even further in the second half of this year. It’s also a crucial time since these are the months leading up to the lucrative holiday season.

Currently, Samsung’s only new offering in the second half are foldable smartphones. Not everyone is willing to buy or trust in one at this point in time. Those who are left can either buy the latest Galaxy S device, which would be outdated in about six months, or just wait until early next year to buy the next Galaxy S flagship.

This would have helped prevent the slump that Samsung sees in its flagship device sales, at least until its foldable shipments increased to levels that the other flagship series consistently achieve. Therefore, can it be said that sacrificing the Galaxy Note series at the altar of the foldables was rightly timed?

Samsung is obviously privy to a lot more information that formed the basis of this decision. Perhaps the increased margins that it has on the Galaxy Z Fold devices make up for the lower shipments overall. It could also be that the company felt that it had to give the foldable devices a completely clear slate in the second half of the year to true shine. Samsung may have feared that its foldables wouldn’t have been able to come out from under the shadow of a new Galaxy Note flagship.

Either way, what’s done is done. Samsung has made it clear that the Galaxy Note series isn’t going to return. If you’re a loyalist, it’s either the Ultra model or nothing at all. You could get your S Pen fix on the Galaxy Z Fold series as well. However, as a long-time Galaxy Note user, I can tell you with confidence that it’s not the same, not even with the Galaxy S22 Ultra.

By malkitrataulJuly 26, 2022UncategorizedComment on Samsung shouldn’t have rushed into cancelling the Galaxy Note series