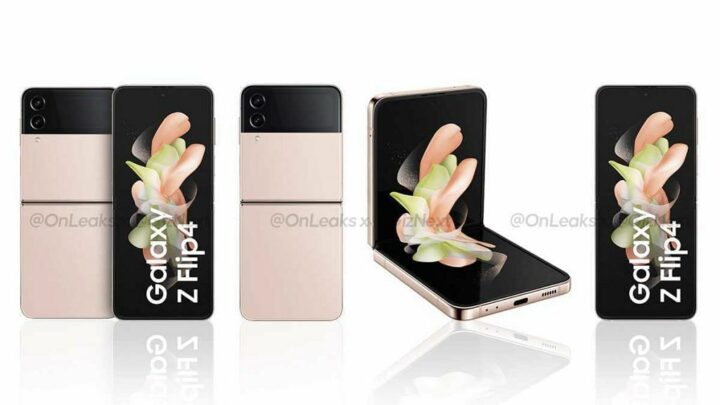 The four color options are Graphite, Pink Gold, Bora Purple (released for the Galaxy S22 earlier this week), and Blue. They all appear to have a matte finish and a two-tone color scheme due to the Cover Display area. (via Giznext)

Beyond the external design, the Galaxy Z Flip 4 should boast the expected yearly upgrades without departing too much from the original formula. The device should come with a newer chipset, i.e., the Snapdragon 8+ Gen 1, 8GB of RAM, and 128/256/512GB of built-in storage.

The foldable AMOLED panel will have a 6.7-inch diagonal, while the Cover Display measures 1.9-inches. The phone should run Android 12 and One UI 4.1.1, and Samsung will unveil it on August 10 at Unpacked.

Preliminary rumors suggested that the Korean tech giant may want to lower the Galaxy Z Flip 4’s launch price after redesigning the hinge and other components, but newer reports indicate that the foldable flip phone might actually be a little bit more expensive than the 2021 model. We’ll find out more at Unpacked next month.