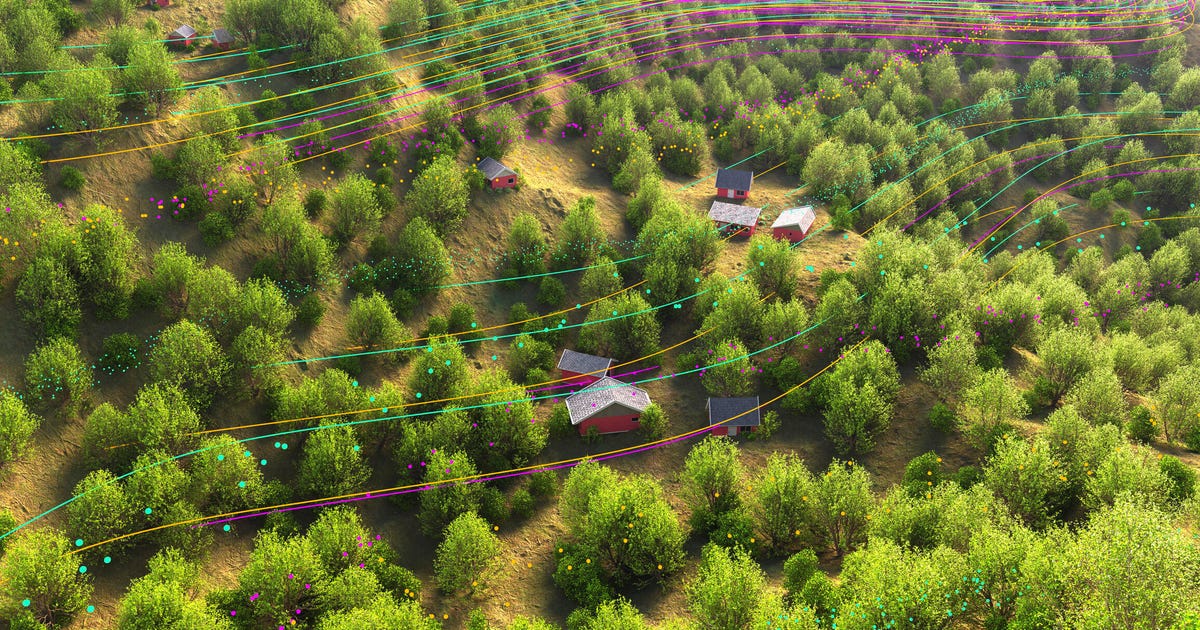 During the pandemic, Liora Bram got even more accustomed to juggling work with family. As life began to open up in the spring, and her children returned to their regular routines of school and sports practices, Bram found herself running her small public relations business from her car as she waited for school pickup or on the sidelines at a baseball game.

She expected her new iPhone 13 and 5G wireless service from Verizon Wireless to help her take her home office mobile. But that’s not what happened. More often than not, she’s found herself unable to access critical apps like Microsoft Outlook because she can’t get a signal. Now she’s just accepted that in some parts of town she has no access.

Bram said she’s chalked up the poor service quality to the fact that she doesn’t live in an urban center and that the 5G signal just may not be robust enough yet. Her town of North Grafton, Massachusetts, is about 40 miles west of Boston. Her community of roughly 7,800 residents isn’t a dense suburban market, but she noted that it’s not exactly rural either.

“I just assumed that a 5G device and service would mean everything would be faster,” she said. “My phone is my lifeline for managing my work and my household. I just don’t understand why I can’t replicate the connection and experience I get at home wherever I am. That to me was the promise of 5G, and that’s not what I’m getting right now.”

Kevin King, a director of communications for Verizon, said he isn’t sure why Bram is having issues, since the company’s coverage map shows that its 5G Ultra Wideband service is offered in her town. He also said the company is in the midst of expanding its C-band midband spectrum, which today covers more than 100 million people around the country and is expected to cover at least 175 million by the end of the year.

Still, Bram isn’t alone in her frustration. While we’re still a long way from seeing any of the much-hyped futuristic applications that 5G was supposed to bring, like autonomous vehicles or augmented reality, even the promised higher download speeds and super responsive networks have been inconsistent or simply unavailable to most people, especially those who live outside big cities or dense suburban communities.

But there’s a potential answer to her 5G coverage issue: more fiber.

Fiber-optic lines buried underground or strung on utility poles might seem counterintuitive when all you hear about are ads talking about wireless everything, but an investment in old-fashioned physical infrastructure is critical to ensure those wireless signals can get to more places and people.  That’s because those signals don’t actually travel that far — hopping between your phone and a local cell tower or base station that’s hooked into that physical infrastructure.

There’s reason to be hopeful on the fiber front. The federal government plans to pour more than $42.5 billion into broadband as part of the Infrastructure Investment and Jobs Act signed into law in 2021. The money, which is being distributed through the US Commerce Department’s National Telecommunications and Information Administration directly to states, is supposed to ensure all Americans have access to affordable, consistent high-speed internet.

Experts have called it a historic opportunity to finally end the digital divide. While the program appears intent on getting fiber connected directly to people’s homes, wireless experts say it could also provide a much needed boost to core infrastructure that can be tapped for mobile 5G in less densely populated areas and rural regions.

Getting broadband — both wired and wireless — to more places is critical as the affordable housing crisis pushes more people beyond the suburbs in rural and exurban areas. That includes North Grafton, which is close enough to commute to a big city, but not dense enough to be considered a true suburb. Those regions have traditionally suffered from poor service because carriers worry there are too few customers to justify the investment.

“It’s a big deal,” said Ben Moncrief, executive vice president of C Spire operations in Alabama. The Mississippi-based regional service provider has been building a fiber network throughout Mississippi and Alabama to support its own regional wireless network and deliver fiber broadband to homes and businesses. “This kind of money, especially in rural areas, could accelerate 5G networks and help lots of small carriers get to places they otherwise weren’t able to get to because the population density is too low.”

But wireless experts concede that access to fiber isn’t the only help needed from the feds to make 5G in rural areas a reality.  Rural and smaller wireless carriers still need federal programs to help fund the deployment of next-generation service in these markets, too.

“Fiber alone is not going to get us nationwide 5G,” said Tim Donovan, senior vice president of legislative affairs for the Competitive Carrier Association. “It’s an important part, but there’s a lot more to it.”

It doesn’t matter which “G” or generation of wireless technology we’re talking about, all wireless networks need to hand off traffic to high-speed, hardwired infrastructure.

“The first rule of building a wireless network is to get signals out of the air and into the ground at the first available point,” said Gary Bolton, who heads the Fiber Broadband Association. “It’s like building a house, you need a strong foundation of infrastructure. And fiber is key, because it’s future proof.”

It’s this future-proofing that led C Spire to start investing in fiber infrastructure in the early 2000s. More than 20 years later, the regional carrier, which operates throughout Mississippi, the Memphis Metropolitan Area, the Florida Panhandle and parts of Alabama including Mobile, has several thousand miles of fiber-optic cable it uses for backhaul for its wireless business as well as a fiber-to-the-home broadband service.

“The company leadership recognized a long time ago that fiber was essential to improving the quality of the customers’ wireless experience,” Moncrief said. “It’s just capable of carrying such huge capacity.”

The investment has allowed the company to keep up with larger national players AT&T, Verizon and T-Mobile in offering the latest 5G service.

There are two big technical reasons why fiber backhaul is critical to 5G. First, because 5G is able to connect more devices and will eventually offer real-time feedback to fuel applications, like self-driving cars and advanced augmented reality experiences, it needs lots of capacity to carry all that data.

Second, true 5G relies on a mix of so-called midband and millimeter wave spectrum that operate at much higher frequencies than the low-band spectrum used to deploy 4G LTE. Because this spectrum is higher frequency, its transmission range is considerably shorter than low-band frequencies used for 4G. This means 5G networks that use midband frequencies in rural areas will need many more cell towers. And those cell towers will need access to more fiber backhaul.

“The future of 5G networks and really any next-generation network depends upon our ability to densify, enrich and build out as much fiber as quickly as we can,” said Chip Pickering, a former Republican Congressman from Mississippi and now CEO of Incompas, a trade association advocating for competition policy across all networks. “Whether it’s 5G, low-orbit satellite, fixed wireless, small cell wireless network; the more fiber we have around the country, the more it enables all the other types of network technologies to be high capacity, highly reliable, and redundant.”

The promise of federal money

Building wireless and broadband networks in rural America is incredibly expensive, and in some places, it’s nearly impossible due to the terrain. But in most cases, the real barrier is low population density. Broadband and wireless providers simply won’t offer service if they can’t get enough customers to pay for it.

It’s a problem that policymakers have faced for decades as they try to close the digital divide. Despite billions of dollars being spent by the federal government to subsidize the cost of building infrastructure throughout the country, the lack of connectivity in rural America still persists.

This is where NTIA’s Broadband Equity, Access, and Deployment program and other programs funded by the Jobs Act come in. The Jobs Act allocated $42.5 billion to go toward building broadband access in areas of the country where it doesn’t yet exist. NTIA has also established another $1 billion program to provide funding for middle mile projects, which is the part of the internet infrastructure serving regional networks.

As part of its rules, the agency stated it will prioritize projects that will “provision service via end-to-end fiber-optic facilities to each end-user premises.” The main objective by making fiber a priority is to ensure that federal dollars are being spent on infrastructure that can be easily and affordably upgraded in the future. But NTIA also noted the importance of leveraging the fiber for other technology, like next-generation wireless because “new fiber deployments will facilitate the deployment and growth of 5G and other advanced wireless services, which rely extensively on fiber for essential backhaul,” the agency said in its published rules.

Access to fiber could be especially beneficial to smaller rural carriers, most of which can’t afford to build their own fiber backhaul networks.  According to a cost model analysis commissioned by CCA in 2021, the total price tag to offer ubiquitous 5G coverage in unserved rural markets would be about $36 billion. Access to fiber backhaul would put a big dent in that cost.

“If the fiber is readily available for carriers to access for backhaul, we can take that cost down by $6 billion,” CCA’s Donovan said. “So that’s a significant savings that can help get 5G built everywhere, even in the most rural and remote areas.”

Not as easy as it sounds

If NTIA is able to fulfill its mission of getting fiber deeper into more communities, it could be a game changer for 5G in rural markets. And 5G in these markets means that the aspirational applications like autonomous vehicles or round-the-clock mobile medical monitoring can actually become reality, because to truly make these applications useful, a network needs to be ubiquitous even for folks just driving or passing through those regions.

But Donovan cautions there’s one big caveat. Small carriers still need access to this infrastructure. And he said that’s easier said than done. He said there are places today in rural areas where fiber already exists, but smaller carriers still can’t get access to it.

“If a fiber provider won’t make it available for a reasonable price, you basically have an interstate highway without an on-ramp,” he said.

Donovan also emphasized that backhaul is only one piece of the puzzle. Smaller rural carriers still need federal funding and support through the Federal Communications Commission’s Universal Service Fund programs to make 5G a reality in rural and less densely populated regions of the country.

“We’ve been building wireless networks for 40 years now in this country,” he said. “If there’s a place that hasn’t been served yet, there’s probably a reason. Financial support through USF and other federal programs specific to the 5G deployment are still going to be an important part of fixing this issue, along with having access to wireless spectrum.”

For Bram and the hundreds of thousands of others out there waiting for 5G to truly come to their town, the ubiquitous coverage can’t come soon enough.

“Right now it feels like things were actually better with my old 4G phone and service,” she said. “And that’s really frustrating. All I want is for things to work consistently, so I can stop stressing.”

By malkitrataulJuly 22, 2022UncategorizedComment on Why Fiber Is the Key to Getting Faster 5G Everywhere