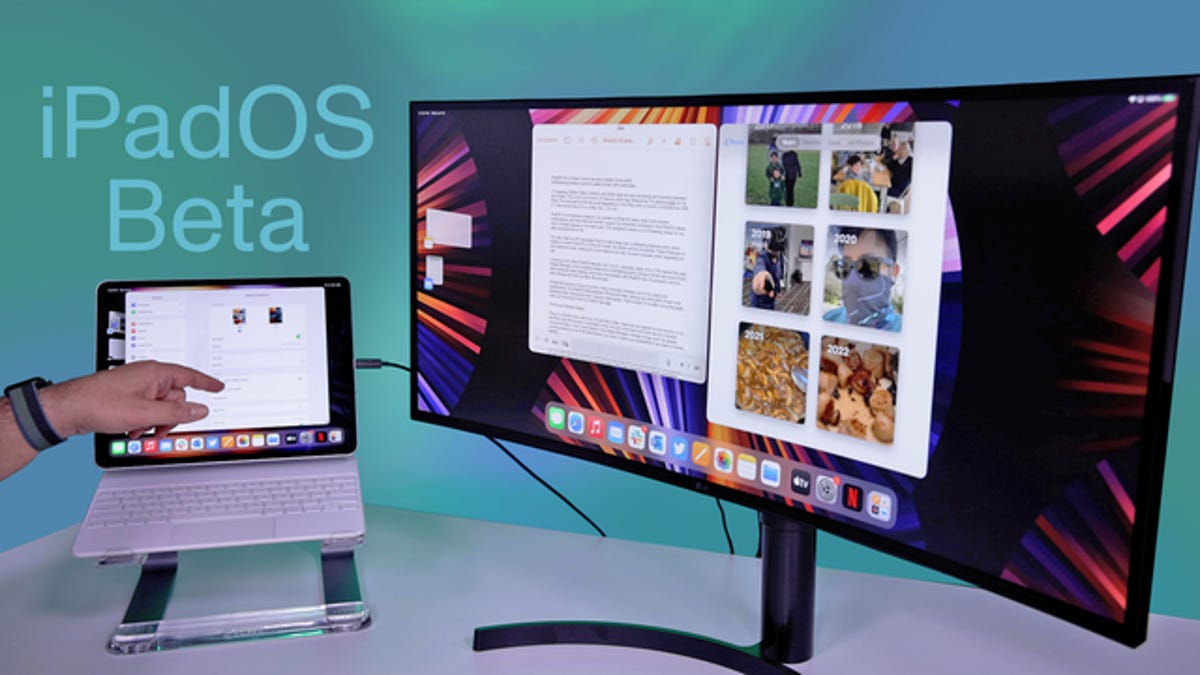 Speaker 1: IPad OS 16 public beta is here and it’s a preview of what’s gonna come out in the fall. There’s a whole bunch of features. A lot of them like the iPhone. And I’m not even gonna talk about them cuz I don’t care about them. The one thing I care about is multitasking because it’s been a dream for me to work on my iPad.

Speaker 1: So I’ve been talking about this for years. The idea of using the iPad as a laptop stand in. I know a lot of you have been thinking about that stuff as [00:00:30] the Mac and the iPad seem like they’re starting to dovetail more and more and they’re starting to look like laptops. The hope is that they’ll start feeling like laptops. Now last year, you know, with the M one ship being put into an iPad, it seemed like it was gonna be every bit as good as a Mac, but there were some limitations. For instance, when you plug in a monitor in the past, it would only mirror. But now the big thing I wanted is here, which is that there is a full monitor support feature on iPads, but only if you have [00:01:00] an M one chip in your iPad, that means you’re basically looking at last year’s iPad pro model. This year’s iPad air and whatever else comes next, but not the entry level iPad at this point that does limit your options. And it means you’re paying a pretty expensive iPad, but can it stand in as a laptop? Yes and no. Let me explain

Speaker 1: Stage manager, which is a feature that’s coming in Mac OS as well, is this whole new multitasking environment. [00:01:30] So to turn on stage manager, you’re going to go into your control center, which is the pull down in the top corner. And there’s a little icon that kind of looks like a square with three dots. It doesn’t look like it’s going to be launching stage manager, but that’s what it is. You tap it. And then it opens. It’s weird that it’s not on by default kind of suggest that apple is almost considering this kind of a pro feature or maybe a beta within the beta, but whatever, it’s something you have to activate to work. And there are a whole bunch of [00:02:00] new display settings within the settings on the iPad. So on display settings on the iPad, you can now change the arrangement of the iPad to the monitor so you can change its position relatively. If you have the iPad over here, you’ll see the cursor goes from one side to the other. You can change a few things about the monitor settings. There’s high dynamic range and standard dynamic range. You can also just trigger, [00:02:30] mirroring the display, which is what you could do on the iPad before. I much prefer keeping it like this.

Speaker 1: So you can bring up to four apps onto a monitor at once. They can look like a Mac layout, but when you start seeing how they can move, you realize they have kind of preset settings. So if you try to move outlook like that and it kind of moves the other apps around

Speaker 1: And let’s say, I want to [00:03:00] take safari. You can see there’s little arrows at the bottom that start to tell you how to drag it. And you can make it bigger. You can make it smaller. We can’t make it smaller than that. That’s it. And you can try stretching it out, kind of get it to go full screen or nearly full screen. You can try to make it narrower, but not narrower than that. It just doesn’t want you to make it any narrower than that. So there are limits, uh, in terms of the size. And again, it’ll either give you [00:03:30] a kind of a forced overlay or it will snap them to a grid where they’ll all fit. And if you want to get rid of one, you have to tap to minimize. So that will minimize it. If you want to take something and you want to zoom it, you tap those three buttons at the top and now it’s filling the whole display, zoom it back out again.

Speaker 1: It will snap it into a non full screen [00:04:00] layout. If you wanna move it to your iPad, you tab, move to display and now it’s popped over here. So how clear is it gonna be to you? That those three dots at the top are in charge of minimizing or moving your display. You’re gonna have to figure out and learn that for yourself. Now, if you already have an app open and you click on an app in the doc, it’s gonna assume that you’re gonna want the one that’s already open in this stage manager layout. So you click there. It’s gonna bring that up. You click on photos, it’s gonna bring the [00:04:30] grouping op open that already has photos. So that could be a little bit annoying. If you’re trying to bring an app in the way you do it is by dragging from the dock or you can drag from here and now it gets added in.

Speaker 1: So while a lot of these new windowing setups work really nicely on a really large monitor, especially this curved wide one. If you’re working on the iPad, display itself, stage manager and its way of swapping apps can start feeling really cramped, [00:05:00] even on a really large 12.9 inch iPad. In which case you really wanna gonna get used to that little zoom button on those three dot things to go back into full screen mode, and maybe you even wanna turn it off. I mean, I find that stage manager again is really only something I’m using when I plug in a monitor.

Speaker 1: But one thing I do like to do is play games while working or thinking that I can play games while working. And I’m really, really into settlers of gaan. I’m really too into [00:05:30] settlers of gaan. Please help me. So, um, game like that, you gotta launch full screen. You can do that while also doing things at the same time. I am tweeting while playing gaan. I, nobody will understand what that means, but I’m just going to tweet that at the same time that I’m working, oh, I gotta place my second settlement here. Why don’t I play a movie while I’m, while I’m having all this fun playing games and uh, and sending slacks and working on my [00:06:00] article on the iPad, I wanna play like one of my favorite weird movies. So I’m gonna try playing, uh, tiny bit of everything everywhere all at once. There’s no,

Speaker 1: There’s no audio. This is, this is, this is outputting. Assuming there’s gonna be playing audio on the, on the speaker, but it’s not playing audio anymore through this. And I can’t find a way to control that unless I’ve missed it in the settings. But by default, [00:06:30] the audio goes away unless you’re putting in AirPods. So that’s frustrating. Also, the other thing is that if you’re gonna try to, oops, it’s my turning content. Again, four, I didn’t need that. It’s a brick total wasted turn. Anyway, if you try to play something over here and you want to bring this back over to the iPad, you, you can’t let me try to launch. Netflix can play something on Netflix.

Speaker 1: [00:07:00] So now this one is playing audio on these speakers, but the app is playing sideways. So your mileage may vary on the iPad OS beta when it comes to multitasking, because I’ve had this happen on games as well. I think that down the road, this type of multitasking is going to be the doorway by which a iPad could become a Mac. Apple seems to be slow playing this so much that hopefully at [00:07:30] some point we’re gonna get something that’s every bit as versatile, but that moment keeps taking year after year after year. At this point, if you’re getting an M one iPad or you’re looking to the fall to see if this can stand in to be a laptop right now, I’d say not exactly, but it’s getting closer. If you want to play around with iPad, OS beta, you can, but I really recommend it’s seriously buggy. I wouldn’t put it on a main device really only if you’re interested in exploring otherwise, I’d wait for the release in the fall when it’s expected alongside [00:08:00] what may be new iPad pro models too. Anyway, thanks for watching. If you have any questions or comments, put them below, I’m gonna keep playing around with this and see what I discover. Thanks for watching.

By malkitrataulJuly 19, 2022UncategorizedComment on iPadOS 16 Beta: The Only Thing I Care About Is Multitasking! – Video