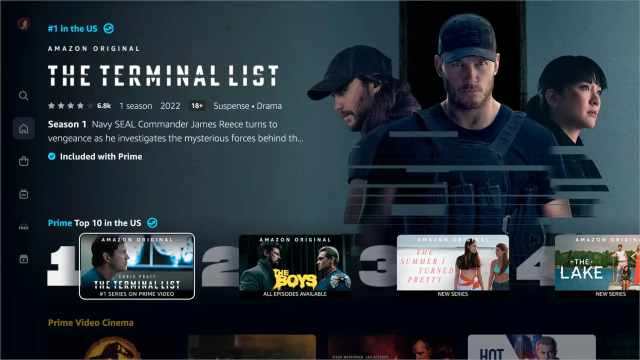 Last updated: July 19th, 2022 at 10:17 UTC+02:00
Netflix arguably has the most intuitive UI compared to all streaming services. While Amazon Prime Video is the second biggest streaming service out there, its UI left a lot to be desired.

Amazon also did not pay attention to revamping its user interface and making it more appealing for its users. Well, it seems at long last, this is going to change as Amazon is rolling out Amazon Prime Video’s biggest makeover in years.

As per Amazon, the new UI is “less busy and overwhelming for our customers.” The outcome of this is an overall Netflix-ish-like UI, which isn’t bad, to be honest.

In the new interface, the navigation bar containing Search, Home, Store, Live TV, Free, and My Stuff sections, now runs along the side of the UI, with featured content on top covering almost the entire homepage. There is a new top ten list as well, and content included with the Amazon Prime subscription is marked with a blue checkmark.
Individually purchased content has a golden shopping bag icon. The new Amazon Prime Video UI is also live for Android and tablets during the initial rollout. The web interface and iOS will be updated in the coming months.

By malkitrataulJuly 19, 2022UncategorizedComment on Amazon Prime Video gets its biggest makeover in years