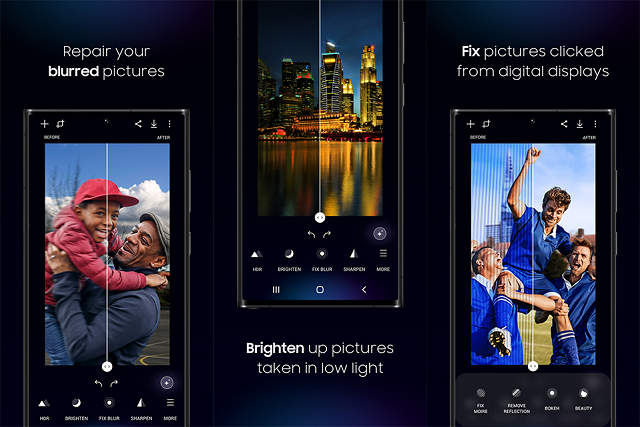 Last updated: July 18th, 2022 at 06:39 UTC+02:00
It is not very often we see Samsung releasing a new app. However, there is a slight change in that notion as Samsung has just released a new AI-powered image enhancement app: Galaxy Enhance-X. This app helps you upscale your existing images with a single click using artificial intelligence.

Multiple apps in the market can perform the same job, like Adobe Lightroom, Snapseed, and Picsart. Samsung Galaxy Enhance-X is in the same category and can help you not only upscale images but also brighten dark images, fix blurry photos, and remove moiré patterns from images. When you enhance an image using the Galaxy Enhancer-X app, both the original and enhanced photo are saved in the gallery in JPEG format.

Not many people seem to be aware of the new app. It app was released on the Galaxy Store on July 7, 2022. The interface of the app, when you open an image, shows you Brighten, Fix Blur, HDR, and Sharpen options. Tapping the More button will give you access to Fix Moire, Remove Reflection, Face Enhancements, and Portrait options.

Samsung’s Galaxy Enhance-X app is compatible with Galaxy smartphones running Android 10 (and above). Apart from flagship Galaxy Note, Galaxy S, and Galaxy Z series phones, the app can also be installed on mid-range Galaxy A, M, and F-series phones running One UI 2.5, 3.0, 4.0, and 4.5.