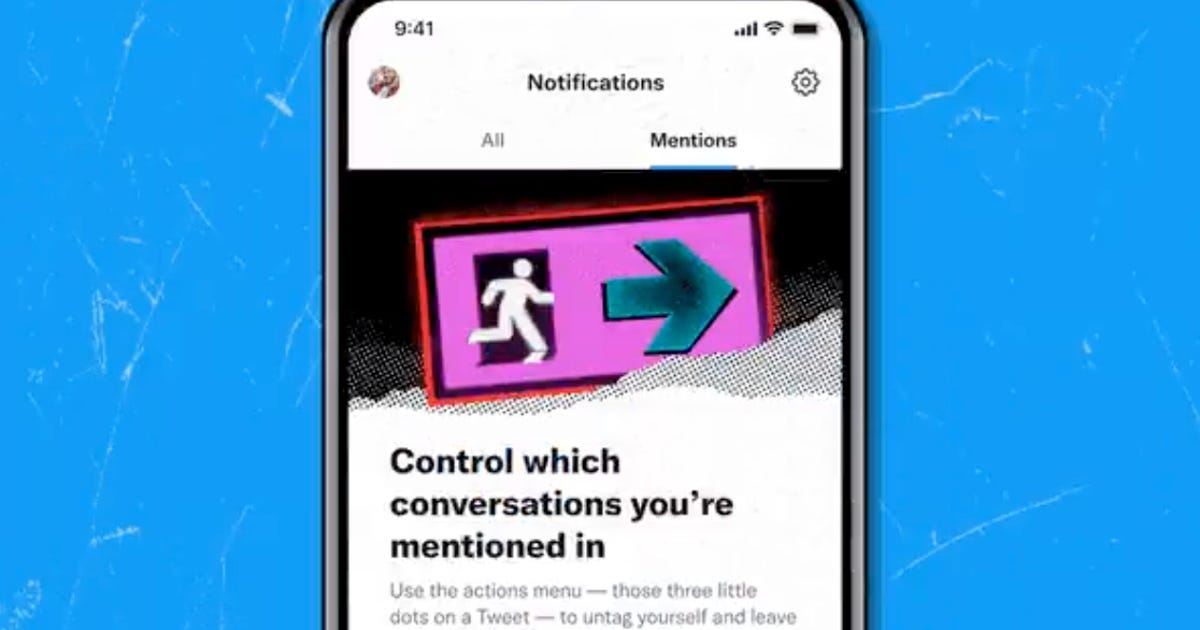 Conversations on Twitter can get pretty heated — there may be times you want to exit a thread. Now the social media platform is publicly rolling out Unmentioning, a feature that lets users untag themselves from any tweet.

Twitter privacy designer Dominic Camozzi first teased in June 2021 that Twitter was working on an option that would allow people to untag their username and keep them from being mentioned again in that conversation.

When the platform began testing the feature among a small group of users in April, Twitter described Unmentioning as “a way to help you protect your peace and remove yourself from conversations.”

Here’s how Unmentioning works. For more on Twitter features, learn how to autoblock unwelcome interactions and “mute” certain words from your feed.

How do I untag myself from a conversation?

Using Unmentioning is pretty easy. If you’re stuck in a toxic conversation or just don’t want to receive notifications for a thread you’re a part of, you can tap or click on the three-dot menu next to a reply in the thread you want to exit and select “Leave this conversation.”

That untags you from the tweet and, though your username still appears in it, it’ll be grayed out. You’ll stop receiving notifications of the conversation and can’t be tagged again in future replies.

Where is the feature available?

According to Twitter, the Unmentioning feature is now rolling out to all users across all devices, whether it’s running iOS or Android.

Can I retag myself later if I change my mind?

Anyone can click on the three-dot menu next to a reply to call up a prompt offering to “get you out of this conversation.”  But once you leave a conversation, that’s it. You can’t tag yourself back in.

Unmentioning is the company’s latest effort to give users more control over their accounts. Twitter is also testing the ability to customize who can see your tweets, though it’s unclear when that will be made widely available.

In April, Twitter said it was getting ready to test editable tweets on its premium subscription service, Twitter Blue.

Developer Kevin Marks noted that Twitter had also started erasing embeds of deleted tweets, leaving only a blank box in their place. Previously, even if a tweet was deleted, the content remained on any web page the tweet had been embedded on.

Marks called the move “tampering with the public record,” but Twitter senior product manager Eleanor Harding said in response that the company was looking to “better respect when people have chosen to delete their Tweets.”

By malkitrataulJuly 12, 2022UncategorizedComment on How to Untag Yourself From Any Twitter Conversation