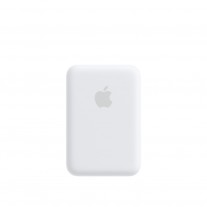 Apple has quietly released its official MagSafe battery pack for $99. The MagSafe Battery Pack is now available from Apple’s website. The Battery Pack only comes in white with a matte finish and features a lightning port to recharge it.

The Battery Pack does not include a charger or cable, nor does Apple list how much you can expect this product to extend the battery life of an iPhone. According to 9to5Mac, the Pack has a capacity of 11.2 watt hours or 1460 mAh which may be enough to fully charge the iPhone 12 mini.

Apple introduced MagSafe on the iPhone 12 lineup and the feature uses magnets that lineup and click into place for the purpose of wireless charging. MagSafe has been implemented into both first-party and third-party cases, wallets, and other charging accessories.