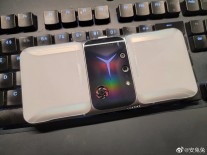 Lenovo will introduce its new gaming handset, called Legion 2 Pro. The phone is expected to come with a massive 5,500 mAh battery, 90W fast-charging (or even 110W), and stick to the side pop-up selfie camera introduced in the first Legion series.

The upcoming device, scheduled to arrive on April 8, was posted by AnTuTu’s official profile on Weibo, revealing the phone’s design. It will have an actual physical built-in fan on the back and will keep the cameras in the middle.

The successor of the Lenovo Legion is sticking to the horizontal orientation – there’s a USB-C port on the side, next to the volume rocker, and we can also confirm the selfie camera will rise from the right (or should we say from the top), with the power key within the moving mechanism.

Interestingly, the phone’s actual design will have white sides, while the middle is reserved for all the design and colors and components so that they won’t meddle with the gaming performance. We can see two cameras, a microphone, a dual-LED flash, the Legion star and the fan all crammed on what appears to be the top step of a rostrum.

However, we do think that’s an optical illusion, and the panel will be flat. We’ll know for sure after Thursday’s event, which we will follow with great interest and then come back to report whether these images are the real deal.

Source (in Chinese) | Via