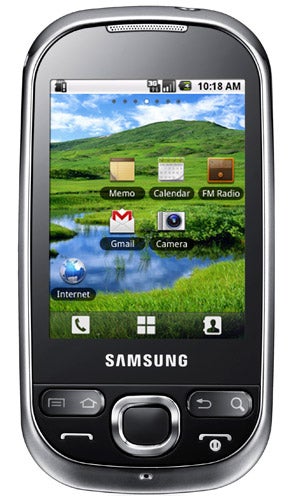 As a flagship phone, Samsung’s Galaxy S has grabbed a lot of media attention, but not everyone can afford its rather steep asking price. It’s also far from the only Android handset in Samsung’s current line-up as the Korean company has steadily been adding new phones to its Galaxy range. The Europa is the latest to put in an appearance and it’s one of the most affordable yet. However, with some compromises having been made to keep the price down, are the results worthy of your hard-earned cash?

At first glance, the Europa looks very similar to Samsung’s Genio Touch. It has the same rounded design and two-tone colour scheme, although the Europa has a more professional chrome and glossy black finish than some of the day-glo colours that the youth orientated Genio is available in. The Europa also feels a lot sturdier. For example, although the rear battery cover is made from plastic it snaps firmly into place and doesn’t creak or flex like on some cheaper models.

The top of the handset is home to a standard 3.5mm headphone jack and you’ll find the volume controls and micro-USB port (which is used for both syncing and charging the phone) on the left-hand side. Samsung has kitted the phone out with the usual menu, home, back and search buttons that you’ll find on most android handsets. These sit above the call buttons and a five way D-pad. All the buttons are traditional physical buttons rather than touch ones, which is no bad thing in our book. One thing that the Europa is missing, though, is a dedicated camera button. As a result, you have to dive into the main menu or use a homescreen shortcut every time you want to launch the camera – not ideal if you need to quickly capture one of those spur of the moment shots.

The screen is the area where the most obvious compromises have been made in an effort to keep the price down. At 2.8in it’s probably the smallest display that you can get away with on a touchscreen device, especially as its resolution is also quite low at just 240 x 320 pixels. Also, although the display uses capacitive technology, Samsung hasn’t enabled it for multi-touch so you can’t pinch to zoom as you can on the Samsung’s Galaxy Apollo GT-i5801 – the next step up in Samsung’s line-up of Android phones.


That said, the display is very responsive to finger swipes, dabs and presses, and seems to be quite accurate too. For example, we were easily able to hit small hyperlinks in the browser first time, whereas on some phones you have to prod around to get them to respond correctly. The display is also reasonably bright, and colours are punchy. However, the low resolution does compromise the web browsing experience somewhat, as when you have the phone held in portrait orientation, text looks a bit blurry even when zoomed in on a column of text on a webpage.


It’s also annoying that the Samsung onscreen keyboard only has a QWERTY layout when used in landscape mode. If you’re working in portrait mode it defaults to a numerical keypad where you have to tap multiple times to reach different letters.

Thankfully, Samsung hasn’t lumped the handset with an ageing version of Android. Instead, the phone runs the relatively recent Android 2.1 release. This means you get the improved user interface that was introduced with this version including some eye candy such as the live wallpapers. For example, there’s one preloaded that has leaves floating on water. When you touch the water you’ll see ripples form on the surface.

Naturally, there are other improvements, too, including HTML5 support, a new contacts list, general speed increases and support for Bluetooth 2.1. Samsung has also added its own skin over the top, but really the only major difference is that instead of the traditional scrolling effect in the main menu, you’re instead presented with a number of screens that swipe back and forth to move through your list of apps. The company has also included its own Samsung Apps store, although this was curiously empty during our review period. There’s also the Layar augmented reality browser along with Samsung’s Allshare software that allows you to share media from the handset to other Samsung devices, including its range of Internet-connected TVs.

On the hardware front, the Europa has 512MB of RAM, 256MB of ROM and runs on a 600MHz processor. It feels quite speedy for a phone in this price range with very little slow down in evidence even with a couple of apps open in the background. The phone covers all the bases when it comes to connectivity too. Along with support for HSDPA, there’s Bluetooth 2.1+EDR, Wireless N Wi-Fi and GPS. Call quality was generally pretty good as the earpiece is loud, but the mic didn’t produce quite as clean audio as some other Android handsets we’ve reviewed. Nevertheless, battery life wasn’t bad as we got just under two days from it for a mixture of calls, web surfing over Wi-Fi and music listening. This is pretty much par for the course on Android handsets.


The phone’s camera is very basic, though. It’s a simple 2-megapixel shooter that lacks both autofocus and flash. The shots it captures are quite poor as colours aren’t very accurate and pictures look smudgy when viewed on a PC. Indoor shots also look pretty bad unless there’s lots of light streaming into the room, as otherwise you end up with excessively grainy and noisy photos.


Obviously, the built-in storage space is a little tight if you’re going to take lots of pictures and videos or store music on the phone, but thankfully Samsung includes a 1GB microSD card in the deal. This tucks into a slot found behind the battery cover, but as you don’t actually have to remove the battery to get at it, you can hot swap cards.


The big downer with the GT-i5500 is the fact that Samsung hasn’t added in multi-touch support, despite the fact that the display uses capacitive technology. Nevertheless, the phone remains a tempting option if you can’t afford the multi-touch enabled GT-I5801, as the screen is very responsive and it feels speedy to use. It certainly trashes similarly priced rivals like the Vodafone 845.